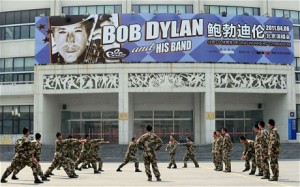 Bob Dylan’s first concerts in China this week remained big news although a major Shanghai newspaper mistakenly used a photo of Willie Nelson for an article promoting his Friday performance in Shanghai.

“In China, maybe many people have heard of Dylan but not many really know who he is,” Beijing music critic Zhang Xiaozhou told London’s Telegraph.

For Dylan’s concert at the Workers’ Gymnasium of Beijing today, the Chinese Ministry of Culture reportedly reserved 2,000 of the 18,000 seats in order to watch the show and monitor the songs.

Dylan canceled concerts last year after refusing to sign a pledge required by the Ministry of Culture that he would “not to hurt the feelings of the Chinese people.” Dylan was able to reschedule the concerts without signing the pledge.

“It’s because it’s forbidden in China that there is so much enthusiasm in China for this film,” writer and producer Stephen Shiu said in London’s Guardian.

“Somehow when you’re doing a 3D movie you always want to make an impressive image because the viewers are going to buy tickets with double or even triple the ticket price to get into a world they’ve never seen before,” Shiu added. “It’s not just some erotica. They want some wow factor.”

“Hopefully there will be more consistency now I’m healthy and out of the contract I signed when I was 21” Ant said. According to Anglophenia, Reynolds also planned to step behind the camera and film Ant’s May comeback tour. The concerts would be Ant’s first series of tour dates in 25 years.

Actress and UNHCR Goodwill Ambassador Angelina Jolie generated a flurry of gossip over photos revealing her latest tattoo during a recent visit to a refugee camp on the Tunisian-Libyan border. According to The New York Daily News, Jolie, 35, flashed a new tattoo on her left arm alongside previous tattoos listing the map coordinates of the birthplaces for her six children. Pundits speculated whether the new tattoo revealed that Jolie and longtime partner Brad Pitt would be adopting a new child or whether the tattoo signified Pitt’s birthplace.