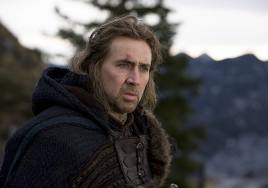 After his recent films Season of the Witch and the 3-D action movie Drive Angry failed to generate much box office, actor Nicolas Cage (pictured as the crusader Behmen in Season of the Witch) considered the discovery of his long-missing and extremely valuable Superman comic Action Comics No. 1 as much-needed good news. According to The New York Post, LAPD investigators found Cage’s comic, missing for 11 years, in a storage unit purchased in an auction. Unique ink markings helped identify the rare comic.

“I knew it was going to appear,” said comic book expert Stephen Fishler. “I just wasn’t sure when.”

“It turns out I am one of the few artists who has the bucks and guts to challenge such usage,” Byrne told London’s Telegraph via a statement.

Crist also posted an apology to YouTube as part of the settlement.

“I’m feeling very manly after my trip to Tampa,” Byrne added. “Other artists may actually have the anger but not want to take the time and risk the legal bills. I’m lucky that I can do that. Anyway my hope is that by standing up to this practice maybe it can be made a less common option or better yet an option that is never taken in the future.”

Crist lost the election to Rubio, who faced criticism for using the Steve Miller song “Take the Money and Run” in an ad without compensating the band.

According to London’s Independent, Peter Jackson took to his Facebook page to announce that he would shoot the two-part film of The Hobbit at 48 frames per second instead of the standard 24 frames per second.

“You get used to his new look very quickly and it becomes a much more lifelike and comfortable viewing experience,” Jackson posted to Facebook. “It’s perfect for 3D films and less blurring during action scenes.”

Jackson added that he hoped for 10,000 theaters to be capable of showing 48 frames per second films when the first Hobbit installment opens December 2012.

Not to be outdone in the arena of new technologies, James Cameron boosted his effort to introduce 3D to broadcast TV by forming the Cameron-Pace Group with Vince Pace. According to The Hollywood Reporter, Cameron announced the new company yesterday at the National Association of Broadcasters in Las Vegas.

“Broadcasting is the future of 3D,” Cameron said. “Everything will be produced in 3D and 2D versions will be extracted from that.”

Cameron and Pace agreed to be co-chairmen of the new company with Pace also confirmed as CEO.