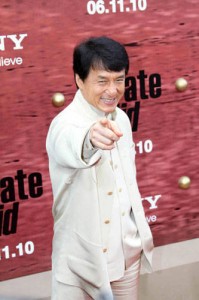 Worldwide star Jackie Chan continued to be one of the great philanthropists in the showbiz community by spearheading the April 1 Artiste 311 Love Beyond Borders concert held at Victoria Park in Hong Kong. According to The Hollywood Reporter, Chan helped raise $3.3M (U.S.) for Japan Relief in just three hours.

“My goal is have zero in my bank account the day I die,” Chan said.

Film and TV star Tsang as well as Andy Lau, Donnie Yen and the Wonder Girls took part in the show directed by John Shum. Chan and his team produced the show in just 11 days. Chan also paid for the plane fare and the lodging for all the performers who traveled to Hong Kong for the show in addition to donating approximately $643K (U.S.) of his own money.

Singer Billy Joel pulled out of his $3M memoir The Book of Joel, about his marriages including Christie Brinkley and his struggles with alcohol, slated for publication June 19. According to The New York Daily News, the passing of the veteran singer’s father Howard Joel on March 7 might have contributed to his decision to ax the memoir.

“It took working on writing a book to make me realize that I’m not all that interested in talking about the past and that the best expression of my life and its ups and downs has been and remains my music,” Joel said.

Six Hollywood studios including Sony, Time Warner, 20th Century Fox and Walt Disney announced a lawsuit against the Internet movie rental site Zediva. London’s Guardian reported that Zediva streams movies when they are available on DVD but before other movie streaming sites like Netflix. Studios claimed that the Silcon Valley startup infringed upon their copyright by streaming films over the web directly from DVD players.

“We also spend millions of dollars to buy DVDs so we would like to think that we are a pretty important customer to the studios,” Srinivasan said.

Finally, fans of the Pixar hit, Monsters, Inc starring Billy Crystal and John Goodman as monster pals Mike and Sulley, received bad news today as director Dan Scanlon’s prequel Monsters University, about Mike and Sulley meeting each other in college, has been pushed back from its original 2012 release date to June 21, 2013.