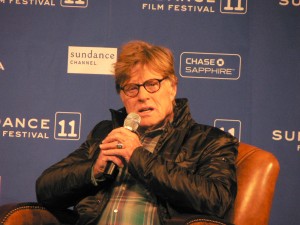 Sundance Film Festival regulars who complained (regularly) about the overall chaos and hassles of squeezing into intimate Park City, Utah every January celebrated the news of a London edition of the independent film fest. Sundance founder Robert Redford told London’s Guardian that Sundance London would launch April 2012 at the 02 as a four-day event with an emphasis on American independent film and independent music.

“Time will tell how it works but we’re coming in very small,” Redford said. ‘I’ve wanted to come to London for a long time and it was a question of how and when. It could only happen if there was someone who wanted us.”

Drew Barrymore stepped behind the camera as a director for the first time on her 2009 roller-girls drama Whip It and she recently announced her sophomore directing gig How to Be Single.

According to The Hollywood Reporter, Barrymore re-teamed with He’s Just Not Into You scribes Marc Silverstein and Abby Kohn (Barrymore produced the film) as well as her Flower Films partner Nancy Juvonen.

Barrymore did not say whether she would also play a role in the movie, based on Liz Tuccillo’s 2008 novel about a group of New Yorkers falling in and out of love over a period of ten years.

Barrymore next appears on-screen as a Greenpeace volunteer working to save trapped whales in director Ken Kwapis’ Everybody Loves Whales.