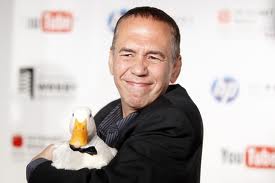 Veteran comic Gilbert Gottfried reminded everyone just how hard comedy can be when recent tweets poking fun at the Japanese earthquake and tsunami cost him his voice-over job as the Aflac duck.

According to the New York Daily News, Gottfried, 56, tweeted: “I just split up with my girlfriend but like the Japanese say: they’ll be another one floating by any minute now.”

More tweets followed over the weekend and Gottfried received the ax yesterday.

“Gilbert’s recent comments about the crisis in Japan were lacking in humor and certainly do not represent the thoughts and feelings of anyone at Aflac,” said Michael Zuna, an Aflac Senior VP and Chief Marketing Officer. Zuna also confirmed that Aflac does three-quarters of its business in Japan.

Warner Entertainment Japan Inc, pulled Clint Eastwood’s drama Hereafter, which features a powerful opening sequence set in the Thailand tsunami in 2004, from Japanese cinemas in response to the current disaster. Satoru Otani, an official at the Japanese division of Warner Brothers, told London’s Telegraph that the tsunami sequences in the film “were not appropriate” at the present time.

If controversy is good for business – this is good news for Miral, the newest drama from filmmaker Julian Schnabel. According to London’s Guardian, Israeli authorities complained to the U.N. about the planned screening for the film at its headquarters in New York due to their opinion that the film, based on Palestinian Rula Jebreal’s book about growing up in an East Jerusalem orphanage and starring Indian actress Freida Pinto, portrays Israel in a negative light.

“This is clearly a politicized decision of the UN one that shows poor judgments and a lack of even-handedness,” Israel’s mission to the UN said in a statement to UN general assembly president Joseph Deiss.

“We are not aware of any other films with such contentious political content that have received this kind of endorsement from the president of the general assembly,” added Haim Waxman, Israel’s Deputy Ambassador.

The 25th year of the WonderCon set for San Francisco’s Moscone Center April 1-3, announced a panel for the upcoming superhero adventure Green Lantern with star Ryan Reynolds as Hal Jordan and Green Lantern and co-stars Blake Lively and Peter Sarsgaard on a panel. The film is to be released June 17. A poorly received trailer squelched fan boy momentum for Green Lantern some months ago. Fingers crossed that WonderCon will generate some positive buzz for the movie.