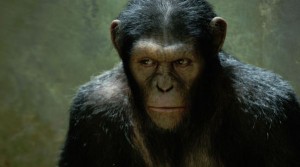 Andy Serkis might be the Laurence Olivier of Motion-Capture performance; an expert at wearing the bodysuit covered with markers that allow engineers to create digital characters like Kong from King Kong and the villainous Gollum from the Lord of the Rings movies based on his movements and facial expressions.

Serkis not only performed as Caesar, the test subject chimp used by James Franco’s scientist in research for an Alzheimer’s cure, but other gorillas, orangutans and chimpanzees in the movie’s epic crowd scenes.

20th Century Fox scheduled Rise of the Planet of the Apes for an Aug. 5 release date, although Serkis quickly pointed out he has more sound effects work to do as a chimp before the movie is complete.

Cannes Film Festival President Gilles Jacob and the festival’s head of selection Thierry Fremaux announced the line-up for the 64th Cannes Film Festival today and Spanish veteran Pedro Almodovar’s The Skin That I Inhabit and U.S. master Terrence Malick’s Tree of Life joined the competition for this year’s festival.

According to The Telegraph, other films included Lars Von Trier’s Melancholia, the latest from the Belgium’s Dardenne brothers, Le Gamin au Velo and Scottish filmmaker Lynne Ramsey’s adaptation of the Lionel Shriver novel We Need to Talk About Kevin.

Earlier, Fremaux announced that Woody Allen’s latest comedy Midnight in Paris would open the festival May 11 and Gus Van Sant’s teen drama Restless was chosen to launch the Un Certain Regard screenings.

The L.A. Times reported on comic Chris Rock and his ensemble cast including Bobby Cannavale and Annabella Sciorra enjoying enthusiastic reviews for their work in playwright Stephen Adly Guirgis’ The Motherf*cker With the Hat.

Rock, best known for his standup act and feature films, made his Broadway debut with strong reviews, perhaps enough to encourage him to make theater a regular part of his creative life.

← The Morning Feed: Nicolas Cage Gets His Rare Superman Comic Back
HiFi: Live Review of Fitz and the Tantrums →

5 comments for “The Morning Feed: Andy Serkis Reveals SFX Magic Behind ‘Rise of the Planet of the Apes’”