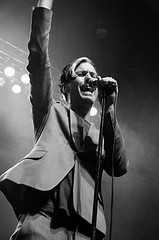 Funky front man Michael “Fitz” Fitzpatrick made no on-stage mention of the fact that he, cohort vocalist Noelle Scaggs and his soulful four-piece band the Tantrums were in the hometown of veteran Funkster Bootsy Collins and just a stone’s throw away from the site of the legendary King Records recording studios.

Still, on a warm April evening in Cincinnati, the L.A.-based soul band Fitz and the Tantrums (FATT) did Bootsy and King Records alum James Brown proud by burning down the house via a scorching performance of sixties-influenced soul.

Fitz and Scaggs sang, danced and interacted with the appreciative crowd like Las Vegas veterans. During the hand-clapping anthem Dear Mr. President, Fitz shook his wiry frame in a tight-fitting retro suit every bit as body hugging as Noell’s sparkly dress.

Fitz tussled in good fun with the band’s amazing keyboardist Jeremy Ruzumna. As Fitz whipped his lick of hair dangling across his forehead, a stream of sweat shot into the screaming crowd and into the face of a frat boy at the front of the stage fist-pumping the entire night.

The full house cheered for popular singles Breakin’ the Chains of Love and encore highlight Moneygrabber but the band, including saxophonist James King, drummer John Wicks and bassist Joseph Karnes were at their best for the jazzy remake of the Euthrymics ‘80s hit Sweet Dreams (Are Made of This), which had the crowd on its knees.

Fitz’s voice soared in the soulful We Don’t Need No Love Songs. In fact, while the crowd responded most enthusiastically to the funkier songs in the set, FATT shined brightest during slower numbers like Tighter.

The Brooklyn-based folk pop band April Smith and the Great Picture Show opened the show with twangy verve and great enthusiasm. Highlights included their bouncy single Terrible Things and a great rendition of the Lesley Gore hit You Don’t Own Me.

Fitzpatrick was a successful studio engineer working with Ladytron before the purchase of a church organ led him to take to the stage and form a soul band.

Cincinnati was just a midway stop into a cross-country tour in support of their debut feature-length album Pickin’ Up the Pieces before the band flips to Europe for shows in London, Paris and beyond before returning to the U.S.

After every show, audiences should drop to their knees (again) and give thanks that Fitz became a soulful crooner at the head of a groovy four-piece band with complimentary vocals courtesy of Noelle Scaggs.

Think of all the fun and funk we’d be missing if he had stayed a producer.

3 comments for “HiFi: Live Review of Fitz and the Tantrums”