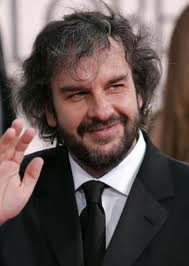 Down New Zealand way, director Peter Jackson (pictured left) continued to prepare for the start of production later this month on The Hobbit, his two 3D movies telling the story of Bilbo Baggins fighting a dragon named Smaug and discovering the ring that would later be discovered by Frodo. London’s Guardian reported on the planned titles for the highly anticipated movies. New Line Studios and Warner Brothers and MGM have registered the titles The Hobbit: There and Back Again and The Hobbit: An/The Unexpected Journey.

News of the titles reminded fans that after ongoing delays over MGM’s financial problems the Hobbit movies are finally set to start production and become reality.

Two and a Half Men star Charlie Sheen took a break from supplying outrageous sound bites via non-stop interviews to thank the Twitter universe for reaching 1.1 million follows by Wednesday, just around 24 hours since he launched his Twitter feed @charliesheen.

According to The New York Post, a Twitter spokesperson couldn’t confirm if Sheen broke any records for gathering followers, an impressive list of fellow celebrities including Howard Stern, Ben Stiller and Ivanka Trump.

Sheen’s break from interviews also allowed pundits to comment on the success of his media blitz. According to HCD, a research company, 84% of the 748 people polled said Sheen could not stay off drugs and 64% agreed with Warner Bros. and CBS shutting down Two and a Half Men.

Former Dior Chief Designer John Galliano, Sheen’s main competitor for news headlines this week, headed for a stint in rehab at The Meadows in Arizona according to London’s Telegraph. Dior hired the PR crisis firm Kekst And Company to handle publicity surrounding Galliano’s firing following his anti-Semitic and racist comments caught on video. Meanwhile, the flamboyant designer issued his own statement addressing his recent actions.

“I am seeking help and all I can hope for in time is to address the personal failure which led to these circumstances and try and earn people’s forgiveness,” Galliona wrote.

“I have fought my entire life against prejudice, intolerance and discrimination having been subjected to it myself. In all my work, my inspiration has been to unite people of every race, creed and religion and sexuality by celebrating their cultural and ethnic diversity through fashion. That remains my guiding light.”

Harry Potter fans celebrated news that the world premiere for Harry Potter and the Deathly Hallows: Part 2 was set for July 7 at London’s Trafalgar Square; approximately a week before the final film in the series opens worldwide.