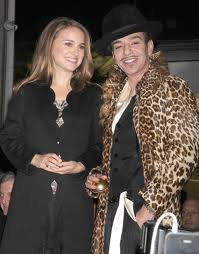 The volatile Two and Half Men star Charlie Sheen made more headlines yesterday via his media blitz of interviews in response to CBS pulling the plug on his hit sitcom due to his offset actions and remarks. TMZ continued to be ground zero for the latest Sheen sound bites including remarks about polygamy, his girlfriends and calling Hugh Hefner an “amateur.”

Christian Dior Chief Designer John Galliano (pictured left with actress Natalie Portman), recently suspended by the fashion house, matched Sheen in the offensive comments category with news of his anti-Semitic and racist comments directed at a couple in Paris.  Galliano also was seen on a video declaring his love for Hitler.

Still basking in the glow of her Oscar for Actress in a Leading Role, Black Swan lead Natalie Portman broke ties with Galliano and publicly condemned his remarks according to The Hollywood Reporter.

“As an individual who is proud to be Jewish, I will not be associated with Mr. Galliano in any way,” Portman said in a statement.

Portman has an endorsement contract with Dior for Miss Dior Cherie fragrance.

London’s Guardian reported that Renée Zellweger agreed to a third Bridget Jones’s Diary movie after being promised that she will not need to gain weight for the role.

Awards Weekend coverage began to fade away with gossipy tales from the after-parties. The New York Post reported on a heart-to-heart talk at the Vanity Fair bash between exes Taylor Swift and Jake Gyllenhaal. Anne Hathaway had trouble getting into the Governors Ball (she was fumbling for her ticket). Veteran actress Joan Collins, 77, had to be taken from the Vanity Fair party in an ambulance because her dress was too tight. Justin Bieber’s mother let the teen singing sensation stay up late for the Vanity Fair Oscar party. True to his rebel reputation, James Franco skipped the parties and flew out of town.