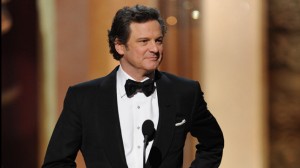 Awards Weekend came to a close this morning with a flurry of after-party tweets criticizing the work of Oscar co-hosts Anne Hathaway and James Franco, although the 127 Hours star received a pass from fans for appearing in drag as Marilyn Monroe and making a Charlie Sheen joke.

All its awards campaign momentum paid off for The King’s Speech, director Tom Hooper’s period drama about King George VI or “Bertie” trying to overcome a lifelong stammer in order to inspire his people in a time of war.

“I have a feeling my career has just peaked,” Firth said on-stage after accepting his Oscar. Behind the curtain, Firth made a point to criticize distributor The Weinstein Company for releasing an alternative version of the film with a PG-13 rating and its profanity muted out of a key scene.

“I don’t support it,” Firth added backstage to The Los Angeles Times. “I think the film has integrity as its stands. I think that scene belongs where it is. I think it serves a purpose.”

Inside Job co-directors Charles Ferguson and Audrey Mars won the Best Documentary Feature Oscar for their film about the recent financial meltdown and Ferguson brought a much-appreciated jolt of political reality to the razzle-dazzle when he reminded the crowd that “not a single financial executive has gone to jail.”

Franco landed a good-natured joke at Charlie Sheen’s expense during the show but Sheen continued to best the Oscars in the news department. The New York Post reported on Sheen’s dueling interviews this morning on NBC’s Today and ABC’s Good Morning America where the embattled Two and a Half Men star announced on ABC his intention to sue CBS for $320 million for “mental anguish” after the network pulled the plug on the show for his off-the-set antics. Meanwhile, during his Today interview on NBC, Sheen said he expected a raise to $3M per episode to return to the hit sitcom because of all that he’s been though during the controversy.

In one of his best sound bites from today’s morning show interviews, Sheen said I’m “tired of pretending I’m not a total, bitchin’ rock star Mars.”