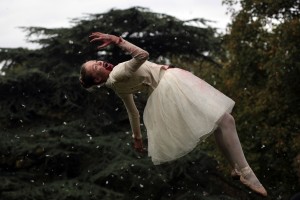 The French filmmaker duo Julien Maury and Alexandre Bustillo are undisputed masters of horror thanks to their incredible debut thriller Inside (A l’intérieur), about a pregnant woman fighting off a bloodthirsty female intruder.

Bustillo and Maury sidestep away from the slasher genre and into the world of Brothers Grimm-inspired fantasy for their sophomore film Livid (Livide). Hardcore splatter fans may be disappointed but Livid is powerful proof of what happens when masters of horror take creative risks and try something bold and new.

Lucie (Chloé Coulloud) takes a job as a home care provider for seniors suffering in various states of illness and dementia but the young woman has ulterior motives.

Lucie and her friends William and Ben plan to rob the houses of the helpless seniors. Their first target is Madame Jessel (Marie-Claude Pietragalla), a former dancer and ballet instructor now comatose and kept alive by an oxygen mask and its long back tube connected to a bedside breathing machine.

Lucie and her friends break into Madame Jessel’s house to find the treasure rumored to be hidden amongst the antique clutter. Their lives fall into danger once Jessel comes alive along with her ghostly ballerina daughter who shares her mother’s hunger for blood.

Marie-Claude Pietragalla makes Jessel a horrific villainess as she shifts from an elderly woman with flowing white hair to her younger self with a long black dress and dark hair pulled back tightly from her forehead.

Jessel is a cruel taskmistress quick to use a switch on her dance students but the greater monster is her young daughter in the white tutu and pink ballet slippers.

Together, Jessel and her daughter provide the bursts of gore that remind audiences that Livid is a movie from the makers of Inside, meaning they do not shy away from blood.

Working with production designer Marc Thiebault, Maury and Bustillo make frightening use of the sprawling mansion covered in vines and tendrils of trees and secured by boarded windows and locked doors.

There are classic fairytale references throughout the movie and plenty of unsettling touches including jars holding preserved animals and a child’s table sitting in the center of a bedroom with taxidermy animals gathered around for a macabre tea party.

In one of the movie’s creepiest moments, a child’s face breaks apart like a damaged china doll.

At the risk of disappointing their hardcore gore fans, Bustillo and Maury deserve acclaim for reaching for new heights in the horror and fantasy genre with Livid.

In a genre filled with tiresome sequels and by-the-numbers remakes, Livid is a slice of horror that’s different, bold and new.