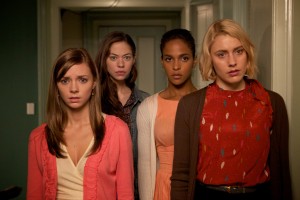 Up-and-coming actress Greta Gerwig and long-absent filmmaker Whit Stillman make a comic dream team in the hip and intentionally odd college-set comedy Damsels in Distress. In an era of exaggerated gross-out comedies, with each new film trying to be more outrageous than its competitor, Stillman’s brand of droll comedy is appreciated more than ever.

Violet (Gerwig) leads a group of fashion-obsessed college girls who takes a needy, new girl named Lily (Analeigh Tipton) under their wing in order to make her more stylish and confident. Lily is just one of many classmate self-improvement projects Violet and her friends tackle as part of their personal arts program to aid depressed students at their small East Coast college. To comic effect, Violet suffers her own emotional crisis when her boyfriend leaves her and she starts falling for Lily’s boyfriend (Adam Brody).

Gerwig, recently seen in Greenberg opposite Ben Stiller and the forgettable remake of Arthur with Russell Brand and Helen Mirren, syncs perfectly with Stillman’s brand of dialogue-driven comedy and subtle nuttiness.

Gerwig and her likable costars — Tipton, Megalyn Echikunwoke and Carrie MacLemore — are the film’s spotlight players but Adam Brody adds some welcome sex appeal as the cute boyfriend at the center of the emotional meltdown.

Without missing a beat, Stillman remains as skilled as ever when it comes to female-oriented storytelling, sharp dialogue and creating quirky female characters. Working with cinematographer Doug Emmett, Damsels in Distress also has the polish and sense of style one remembers from Stillman’s earlier films Barcelona and Metropolitan.

Stillman’s best film remains his 1998 comedy The Last Days of Disco starring Kate Beckinsale and Chloë Sevigny. While Damsels in Distress, which recently played festivals in Venice and Toronto, does not match Last Days of Disco’s comic brilliance it’s a strong and enjoyable return effort.

It’s also impressive that Stillman really hasn’t changed with the times; looking around at what’s popular on movie screens today and trying to come up with his version of a Judd Apatow comedy. Instead, he remains true to his ideas about comedy and proves that there’s a white space on the cinema landscape ready for his return.

In the gap years since Last Days of Disco there have been Stillman-inspired comedies from other filmmakers including Zeina Durra’s wonderful Imperialists Are Still Alive! Still, nothing compares to new work from the filmmaker who started it all.