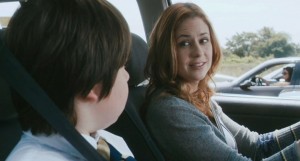 Jenna Fischer in 'A Little Help'

In their extensive reporting project for Fortune magazine, Agee and Evans bring to life the forgotten people, the Alabama sharecroppers who work hard everyday and pass through the world with little notice.

Agee’s book and its theme of forgotten people are even more relevant in today’s 24/7 news cycle. Despite all the media outlets both traditional and online, hardworking people, especially society’s underbelly, are mostly forgotten. Instead, we have a celebrity news culture reporting on each small detail of a showbiz star’s private and public life in real time.

I think about Agee often, both as a critic and a writer. In recognition of his spirit, I call this column Let Us Now Praise, in order to shine the spotlight on the supporting players, up-and-comers, undiscovered artists and talented crewmembers working in the shadows of the celebrities around them.

Chances are you recognize Jenna Fischer from her role as receptionist Pam Beesley on the hit TV sitcom The Office but you probably didn’t know her name or much about her.

After all, Fischer is a supporting player on The Office, the straight woman responsible for delivering a sassy line of dialogue or two from behind the receptionist desk and allowing star Steve Carell or more prominent members of the cast such as Ed Helms, John Krasinski and Rainn Wilson to shine.

Fischer makes a dramatic leap in writer/director Michael J. Weithorn’s comic drama A Little Help. Fischer gives the most complex performance of her career playing Laura, a middle-aged mom alone with her teenage son after the unexpected death of her husband.

Laura is unsure how to act after the death of her husband (Chris O’Donnell) since he was cheating on her. She’s also ill-equipped to handle her grieving son Dennis (Daniel Yelsky) who’s telling classmates his father died in the 9/11 World Trade Center attacks in order to gain sympathy.

Fischer captures Laura’s complex swirl of emotions perfectly and proves to be more than capable of holding an entire movie on her petite shoulders.

It’s quite an accomplishment for an actress known as the face behind the receptionist desk on The Office.

In fact, Fischer is so good in A Little Help, a film that’s truly worth seeing mostly for her performance, one hopes she won’t allow her commitment to the show to prevent her from taking more lead roles in intimate, independent gems like A Little Help.