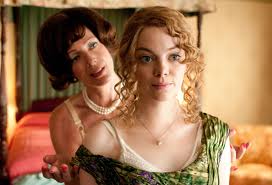 It’s a tricky thing, laughing at Howard’s sly performance as Junior League leader Hilly aggressively promotes the Home Help Sanitation Initiative, a law that says all domestic help should have separate bathrooms outside the home so not to spread disease.

Set in Jackson just before the Civil Rights Act was passed in 1964, The Help is brisk, breezy and intentionally warm-hearted despite its difficult topic of entrenched racism in the Deep South. It’s a storytelling flaw Taylor carries over from Stockett’s book. Instead of an emphasis on the hard-hitting facts of its subject, Taylor, who grew up with Stockett in ‘70s Jackson, places all his attention on teary melodrama instead.

With the help of Aibileen and Minny, Skeeter writes an anonymous oral history of the lives of black maids in ‘60s Mississippi and their hard experiences with their white female employers and the experience changes their lives.

Stone flashes plenty of wide-eyed earnestness and professional ambition as Skeeter, an aspiring progressive trying to topple the entrenched racist practices of her hometown.

Jessica Chastain, last seen as a solemn ‘50s housewife in The Tree of Life, is bubbly and vivacious as Celia Rae Foote, a peroxide blonde in tight dresses who turns out to be the one employer who treats her maid fairly.

Veteran actress Viola Davis, enjoying her highest profile role since Doubt, brings some much-needed subtlety to the movie as the wise and calm Aibilene, a mother still haunted by the tragic death of her twenty-something son.

As the no-nonsense Minny, Octavia Spencer matches Howard when it comes to laughs. In fact, the film’s best moments are the scenes when Minny and Hilly go face-to-face; especially over a certain chocolate pie.

A well-dressed melodrama is something to admire and Taylor is skillful at pushing the emotional buttons that make moviegoers laugh, cry or a little of both at the same time. The Help is not a powerful social message drama along the lines of another Civil Rights movie, Mississippi Burning, just as Stockett’s book pales in comparison to true classics like To Kill a Mockingbird. It’s a glossy soap opera with a memorable villainess thanks to Bryce Dallas Howard.

Scriptwriter: Tate Taylor, based on the novel by Kathryn Stockett

← Let Us Now Praise: ‘A Little Help’ lead Jenna Fischer
Get Me Ron Perlman! Mike Myers Back for ‘Austin Powers 4’ →