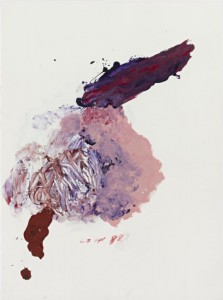 American abstract painter Cy Twombly, one of the influential painters of the New York School, died today at age 83 according to the art online forum Hyperallergic. Born in Lexington, Virginia in 1928, Twombly arrived in Manhattan in 1950 and studied at the influential Black Mountain College in Asheville, North Carolina. He received his first solo show at the Leo Castelli Gallery in New York in 1960; a major retrospective in 1979 at the Whitney Museum of American Art and in 1994 the Cy Twombly Gallery, a Renzo Piano-designed building based on a sketch by Twombly, opened at the Menil Collection in Houston.

“Twombly is an abstract painter who tells stories of love, longing and loss,” Guardian critic Jonathan Jones wrote in a review of the current exhibition Twombly and Poussin: Arcadian Painters. “His art is always tangy with experience – it drips life. Hero and Leandro is one of a fistful of works by Twombly that snag the imagination with their impulsive blooms of gory color.”

The exhibition Twombly and Poussin: Arcadian Painters opened June 29 at the Dulwich Picture Gallery in London.

The British Film Institute announced plans to restore silent Alfred Hitchcock films to screen at the London 2012 Festival as part of the 2012 London Olympic Games.

According to The Independent, the BFI also hired Indian-British composer Nitin Sawhney to contribute a score to the 1926 film The Lodger: A Story of the London Fog and Royal Academy of Music graduate Daniel Cohen signed on to score the 1925 film The Pleasure Garden.

“The BFI is thrilled to be able to bring Hitchcock’s early films to the London 2012 Festival,” said BFI creative director Heather Stewart. “They are the foundation of his whole body of work and new audiences will be able to enjoy an incredible mix of British musical talent.”

Eleanor Friedberger of The Fiery Furnaces, spoke to Vogue’s Freddie Campion about her debut solo album Last Summer, due in stores July 12.

For the video of the album’s first single My Mistakes, Friedberger used old VHS footage from a student movie of her preparing for a date.

“It was just a happy accident when we found the original videos because it works so well with the song,” she added. “It might have been trying to make some feminist statement but it’s supposed to be a little bit of a joke.”

4 comments for “The Morning Feed: Cy Twombly Dies At Age 83”