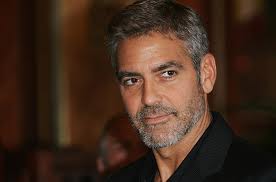 Celebrity gawkers grew excited at the possibility of actor and filmmaker George Clooney as a witness in the upcoming trial of Italian Prime Minister Silvio Berlusconi. According to The New York Post, Berlusconi’s legal team recently submitted 78 witnesses, many of them celebrities, to call in Berlusconi’s defense.

“We have proposed George Clooney as a witness,” a lawyer told the AFP, although he did not share Clooney’s relationship with Belusconi or why the Hollywood celebrity would make a good witness.

Berlusconi’s trial has been set to begin April 6 for allegedly paying pole dancer Karima El Mahroug for sex when she was 17.

Rob Lowe, who very well could be on Berlusconi’s witness list or at least added, posed shirtless for the May issue of Vanity Fair and provided excerpts from his upcoming memoir Stories I Only Tell My Friends: An Autobiography.

Lowe, 47, made news talking about his days as a Hollywood twenty-something and hanging out with bad boy of the moment Charlie Sheen.

“We competed to see who could play harder and then show up for work and still kick ass,” Lowe told The New York Daily News.

Asked who succeeded, Lowe answered with a laugh: “Charlie by a nose.”

Financial analysts placed a price tag on the estate of the late Hollywood icon Elizabeth Taylor and the amount was startling. According to The Guardian, Taylor was worth $1B at the time of her death thanks to her jewelry collection (valued at $150M in 2002) and a portfolio built on the business deals and sale of her two Elizabeth Arden fragrances White Diamonds and Passion. An upcoming auction of early love letters should tweak the estate’s value even higher.

Fans of the critically acclaimed and hip-to-watch cable drama Mad Men celebrated the news that the show would return for a fifth season. Unfortunately, the antics of ‘60s New York ad exec Don Draper (Jon Hamm) and his team at the agency Sterling-Draper-Cooper-Pryce won’t return to screens until 2012 due to ongoing negotiations between series creator Matt Weiner and the show’s production company Lionsgate.

“AMC has officially authorized production of season 5 of Mad Man, triggering our option with Lionsgate,” AMC told The Hollywood Reporter via a statement. “While we are getting a later start than in years past due to ongoing, key non-cast negotiations, Mad Men will be back for a fifth season in early 2012.”

Of course, Mad Men fans won’t breathe a sigh of relief until Jon Hamm, I mean Don Draper, steps in front of the camera for the first day of production.