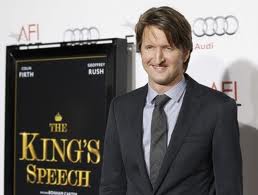 Just days away from the most important night in the career of director Tom Hooper and his film The King’s Speech, the story of King George VI or “Bertie” (Colin Firth) and his fight to conquer his lifelong stammer, remained a favorite for numerous Oscars. When I last spoke to Hooper at the launch of The King’s Speech, nominated for multiple Oscars including Best Picture, Actor in a Leading Role and Directing, he shared his passion for upcoming projects including a drama about Nelson Mandela. Granted, Hooper, 38, rapidly became a hot commodity thanks to his film’s critical and commercial success but The L.A. Times raised eyebrows with news that Hooper was offered the job to direct the superhero sequel Iron Man 3. To the delight of audiences of more serious movies, Hooper turned down the chance to direct a comic book adventure, allowing director Shane Black to join the project, and hinted that a new version of Les Miserables might be in his future.

Actress Melissa Leo continued to receive bad publicity for her self-financed trade ads promoting her nomination for Actress in a Supporting role for The Fighter. London’s Guardian took a critical shot at Leo’s self-promotion. One question the column failed to ask: Did Leo feel that Paramount was pushing co-star and fellow supporting actress nominee Amy Adams more than her?

The New York Post reported on push-back from former Yankees regarding Ben Affleck and Matt Damon’s planned movie The Trade, based on the story of pitchers Mike Kekich and Fritz Peterson swapping wives in the ’70s. Affleck and his brother Casey Affleck continued working on a rewrite but outreach to former Yankees, especially Kekich, have turned up empty. No word yet if Affleck and Damon would play the pitchers. or the actresses who would play swapped wives Marilyn Peterson or Susanne Kekich.

Of all the Oscar Week sights and sounds revealed so far, co-hosts James Franco and Anne Hathaway generated the most fun via clips of them rehearsing segments from the mini-movie that opens the Oscars telecast. Clips hinted at a rendition of You’re the One That I Want from Grease and Hathaway poking fun at the title song Don’t Cry for Me Argentina from Evita. Based on their rehearsals, Franco and Hathaway looked ready to have fun with the often dull awards show.