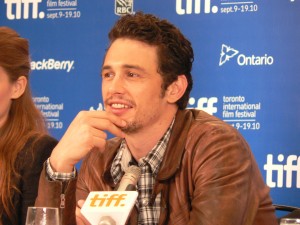 I’ve written James Franco’s lead joke to be delivered as he takes the stage with Anne Hathaway as co-hosts of the 83rd Academy Awards Sunday night.

Staring deep into the teleprompter, Franco smiles and says, “People think that standing here hosting the Oscars is nerve-racking and wonder how I can possibly keep it together. Well, after cutting off my arm as rock climber Aron Ralston in my movie 127 Hours, standing here with Anne feels easy and breezy.” Franco then winks, pulls out a pocketknife and pliers and recreates the harrowing scene from his Oscar-nominated film.

It could happen. Really. In a year where Franco is busy doing just about everything — directing a documentary about SNL, purchasing the rights to Stephen Elliot’s book The Adderall Diaries via his production company Rabbit Bandini and creating visual arts installations in addition to acting in big-budget features as well as indie films — it makes sense for the 32-year-old actor to co-host the Oscars and stamp the ceremony with his irreverent spirit.

In director Danny Boyle’s 127 Hours, nominated for a Best Picture Oscar among others, Franco delivers some of his best work as Ralston, an energetic twenty-something whose weekend excursion in the Utah canyons turns deadly when his arm becomes trapped against a half-ton boulder.

For Franco, nominated for Actor in a Leading Role, he continues to credit Ralston for not only inspiring his performance but also making it possible.

“The first time I met Aron in L.A. he brought a tape that had all the videos he made in that canyon,” Franco said, speaking earlier at the Toronto International Film Festival. “That’s gold for an actor. I got to see him in that situation…when I saw him in those videos he had no idea he was going to get out. It was incredibly powerful.”

Of course, there are no guarantees that Franco will win an Oscar. If he does, nobody will criticize his victory. His performance is that exceptional.

The Oscars, co-hosted by Franco and Hathaway, air 8 p.m. EST Sunday on ABC.

4 comments for “7 Days of Oscar: James Franco is Oscar Host and Possible Winner”