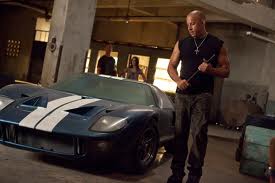 They stare each other in the eye as they flex their muscles to see who’s the better strongman. Vin Diesel is a linchpin of the Fast & Furious franchise; going back to the first movie about street racers and the criminal underworld. Dwayne Johnson is new to the series; making his debut in the fifth installment Fast Five. It’s safe to say Johnson will be back as stone cold Federal agent Luke Hobbs. Johnson matches up too well against Diesel’s globetrotting car thief Dom Toretto for producers to cut him loose after one adventure. In fact, the entire gang, Toretto’s pretty sister Mia (Jordana Brewster), cop-turned-thief O’Conner (Paul Walker) and numerous criminal colleagues from past jobs (films) all return for Fast Five. These returning favorites make a great reunion although one wishes scriptwriter Chris Morgan would have provided a few more surprises and a less silly action climax. To Morgan’s credit, as well as director Justin Lin (directing his third Fast & Furious film, no less), Fast Five is retooled as a heist movie with less emphasis on the illegal street racing that launched the franchise in 2001. Lin and cameraman Stephen F. Windon make great use of the film’s Rio locations especially its hillside favelas. Think ‘The Brazilian Job’ instead of the heist film favorite The Italian Job. Still, cliché dialogue and too many over-the-top moments sap the fun out of Fast Five’s impressive stunts and likable cast.

Former cop Brian O’Conner (Walker) and Mia Toretto (Brewster) break her brother (Diesel) free from a prison bus in the first of many explosive action scenes. They escape to Rio but take one last car theft in order to gain enough money to buy their freedom. Stealing the expensive collector cars from a speeding train turns out to be the highlight of Fast Five, an eye-popping stunt worthy of a James Bond movie. But the movie is just getting rolling as the Fast & Furious trio battles Rio’s top mobster (Joaquin de Almeida) and the federal agent on their tail (Johnson). They bring back former colleagues (Tyrese Gibson, Chris “Ludacris” Bridges, Sung Kang, Gal Gadot, Tego Calderon and Don Omar) to stage an elaborate heist, stealing the money from all of the mobster’s safe houses. Of course some elaborate street racing is required to get the job done.

Vin Diesel enjoys the grandest entrance of all the actors and he poses well against fellow muscleman Dwayne Johnson. Still, Diesel loses some of his trademark intensity playing the mother hen of the criminal team and being the nice guy is not his strong suit.

Series regular Paul Walker is plenty affable but he remains the dullest member of the team.

Jordana Brewster remains the sexy girl in the fast car and to her credit she proves to be as tough as the boys.

Surprisingly, the supporting players far outshine the film’s headliners and the good-natured humor between Gibson, Ludacris, Kang, Gadot and the others boosts the screeching car chases, gravity-defying stunts and explosive crashes.

The camera zooms two too many times over the rooftops of Rio and many of the action stunts are too outrageous for their own good. Still, Lin has become a solid action filmmaker. It’s the script that prevents him from fully delivering on the film’s potential.

Scriptwriter: Chris Morgan, based on the characters created by Gary Scott Thompson