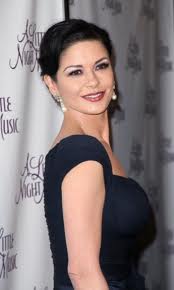 Although her career is as robust as ever after winning a Best Actress Tony for A Little Night Music, Catherine Zeta-Jones made headlines for checking herself into Silver Hill Hospital for treatment of bipolar II disorder.

Zeta-Jones spoke publicly about her illness for the first time telling People that she hopes her openness would inspire others to get help.

“If my revelation of having bipolar II has encouraged one person to seek help, then it is worth it,” the 41-year-old actress said. “There is no need to suffer silently and there is no shame in seeking help.”

As reported by The New York Post, Zeta-Jones was battling depression and the increased stress of husband Michael Douglas battling throat cancer.

Zeta-Jones recently joined the musical Rock of Ages, Lay the Favorite, director Stephen Frears’ adaptation of Beth Raymer’s memoir about the world of high-stakes gambling. She also signed on opposite Gerard Butler in the soccer moms’ comedy Playing the Field.

Lada Gaga announced plans to release a music video for her bouncy new single Judas on April 15, Good Friday for Christians around the world, and the news generated all the controversy she expected.

According to The Telegraph, the Catholic League for Religious and Civil Rights promptly criticized the singer.

“She is trying to rip off Christian idolatry to shore up her talentless, mundane and boring performances,” said spokesperson Bill Donohue. “Another ex-Catholic whose head is turned around…Is this the only way to jet up her performance? This isn’t random. We are getting closer to Holy Week and Easter. Does she actually believe her own BS?”

Gaga’s new album Born This Way is out May 23.

“What’s cool that happened organically is there are 60 first-time filmmakers in the festival out of 93 feature films this year,” programming director David Kwok told The Hollywood Reporter. “There’s discovery across the board. There’s always been a good pool of new talent coming out of the festival.”

Films selected for this year’s event, running through May 1, included The Union, Cameron Crowe’s documentary about Elton John’s collaboration with Leon Russell, the comedy Jesus Henry Christ and the western Blackthorn, about the final years of outlaw Butch Cassidy.

The French street artist known as Space Invader , best known for the tiled tags inspired by the classic video games he attaches to buildings around the world, was one of two French nationals arrested by Los Angeles police on charges of vandalism in the city’s Little Tokyo neighborhood.

According to The Los Angeles Times, Space Invader was believed to be in Los Angeles in support of Art in the Streets, a major exhibition on graffiti and street at L.A. MOCA.

The arrest occurred near MOCA’s gallery in Little Tokyo where Space Invader and his colleague were nabbed with buckets of grout and tile.

The accused vandals were released and believed to have jetted back to Paris but not before leaving one of their trademark tile mosaics on the Perez building in Little Tokyo.

1 comment for “The Morning Feed: Catherine Zeta-Jones Talks Openly About Her Bipolar Disorder”