The Night Of: Series One, Episode Six ‘Samson and Delilah’

Our Summer of American Politics is filled with exaggerated accusations, extreme behavior and bizarre stories. It’s no wonder many of us have become addicted to coverage of the 2016 U.S. presidential election.

Meanwhile, our Summer of TV, or at least on summer’s best TV drama, is grounded, gritty and brutally realistic.

I’ve yet to send a thank-you card to HBO for balancing our political summer with the one-for-the-books crime series The Night Of, although I still have two weeks to share my gratitude for keeping the world real.

Adapted by veteran author Richard Price (Clockers) and writer/director Steven Zaillian (American Gangster) from the BBC mini-series Criminal Justice, The Night Of follows Nasir “Naz” Khan (Riz Ahmed), a working-class Pakistani-American student in Queens who sneaks off with his father’s taxi for a night of partying in Manhattan. Everything changes after a pretty girl named Andrea (Sofia D’Elia) gets in the cab asking for a ride uptown. They flirt; take drugs; have sex; only for Naz to wake up and discover Andrea brutally murdered in the bed they just shared.

Arrested, sent to Rikers Island jail; and placed on trial; it’s up to Naz’s attorneys Chandra Kapoor (Amara Karan) and John Stone (John Turturro) to uncover the truth behind the vicious crime.

Six episodes into the eight-part series, The Night Of continues to release a steady stream of clues, facts and details. For audiences keeping score, the edge-of-the-couch fun comes with tracking the Clues that matter with the Red Herrings meant to distract us. 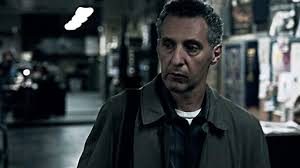 Attorney John Stone (John Turturro) wades through Red Herrings and Clues in the HBO crime series ‘The Night Of.’

Real Clue or Red Herring: John Stone learns that Andrea was set to inherit a lot of money from her late mother and that her stepfather Don Taylor (Paul Sparks) wanted more than his share.

Real Clue or Red Herring: Chandra interviews a Funeral Home worker who spoke with Naz on the night of the crime and receives a sinister spin on the Samson and Delilah story.

Real Clue or Red Herring: A longtime sufferer of eczema on his hands and feet, Stone can finally wear shoes after trying an herbal remedy from a Chinatown doctor.

Real Clue or Red Herring: Naz continues to build a relationship with fellow Rikers inmate Freddy Knight (Michael K. Williams) including sharing drugs and getting the words “Sin” and “Bad” tattooed on his knuckles.

The Night Of airs Sundays at 9pm ET on HBO and streams via HBO GO.