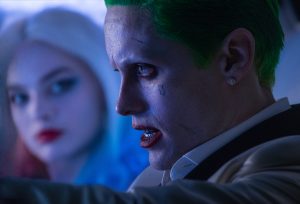 The 2016 Comic-Con International: San Diego may have wrapped July 24th but the sneak peeks of upcoming blockbusters, TV series previews and cast panel discussions continue to resonate beyond Hall H of San Diego’s convention center and across our fantasy fan-filled world.

If like me, you didn’t make it to San Diego this year, there’s no reason to feel like a lonely genre buff. Comic-Con’s Brand Is Buzz with the assembled studios and media outlets doing a great job sharing and streaming their latest stories for the most impressions possible.

With Warner Bros. striking first and revealing trailers from upcoming DC blockbusters Suicide Squad, Wonder Woman and Justice League as well as the monster movie mash Kong: Skull Island; it’s safe to say the multiplex battle between DC and Marvel Studios is as heated as what takes place between the comics pages.

Of course, Marvel refuses to take a back seat to anyone — especially at Comic-Con — and promotes its movie slate and Netflix franchises with gusto.

Here’s my Comic-Con scorecard; measured and tabulated from desk-side streaming over the course of the fest. I have to admit that DC grabbed my heart as a kid with special spots for Batman and The Flash. Still, who doesn’t like Marvel and the amazing series coming to life at Netflix?

The Reveal: Director Patty Jenkins follows in the footsteps of Marvel’s Captain America: The First Avenger and introduces the Amazon princess known as Diana (Gal Gadot) in a period war adventure.

The Reveal: Bruce Wayne (Ben Affleck) plays caped recruiter in the debut trailer for Zack Snyder’s Justice League. Without Batman’s cape and mask, Wayne pitches The Flash, Aquaman and Cyborg on teaming up to protect Earth from a new enemy.

The Tease: Ezra Miller brings welcome laughs and a jolt of energetic fun as Barry Allen aka The Flash. Based on Miller’s brief scenes with Ben Affleck, look for the 23-year-old actor to be Justice League’s scene-stealer.

The Tease: Legion has a form of dissociative identity disorder, which results in multiple personas controlling his many mutant powers.

← This Week in Cinemas & Streams: Actor Brady Corbet Makes Feature Directing Debut With ‘The Childhood of a Leader’
Celebrating Red Herrings with HBO Crime Series ‘The Night Of’ →