Bruce Springsteen canceled his Sunday concert scheduled for Greensboro, North Carolina in protest of the Southern state’s HB2 or “bathroom law.” The controversial state law bans transgender people from using the bathrooms based on their gender identity, as well as eliminating expanded protections for the LGBT community.

According to Politico, while multiple conventions and trade shows continue to cancel events originally booked for Charlotte and PayPal looks to relocate a planned 400-person facility, it’s the protest statement by the Grammy-winning Springsteen that’s generating the biggest headlines. 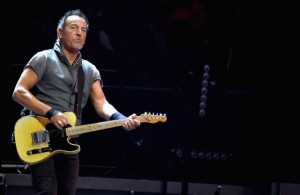 “Some things are more important that a rock show and this fight against prejudice and bigotry – which is happening as I write – is one of them,” Springsteen said in his statement. “It is the strongest means I have for raising my voice in opposition to those who continue to push as backwards instead of forwards.”

No word yet on other artists cancelling concerts planned for North Caroline. Still, look for Springsteen to ignite additional support from the entertainment community and join his protest against North Carolina’s awful “bathroom law.”

“I am delighted to be going on tour throughout North America to thank all who have followed my work from the beginning and all who have just discovered me,” Donovan said in a statement.

Country Western fans lined Silver Bridge Road in Palo Cedro, California Saturday to honor the private funeral procession for Merle Haggard, who died April 6 from pneumonia at age 79. According to USA Today, these same fans, including Tim Coffman, 47, and his wife, Kristin, 45, laid flowers outside Haggard’s front gate and listened to the invite-only memorial service.

The 2016 Music Festival Season officially launches Friday with the first weekend of the Coachella Music and Arts Festival. Red Bull (why not?) breaks down their lineup picks including Guns N’ Roses, LCD Soundsystem, Calvin Harris, Skrillex and Diplo.

See you in Indio!