A dramatic dip in sophomore weekend crowds suggest that while director Zack Snyder’s Batman v Superman: Dawn of Justice may be a must-see movie for blockbuster movie buffs, its flat reviews are keeping fans from watching it a second time.

Still, don’t lose hope about a storytelling rebound with the upcoming DC Universe blockbuster Justice League, set to open Nov. 17, 2017 from from Warner Bros. In the meantime, take a break from superhero movies and use the springtime to catch some indie-spirited fare.

Michael Shannon reunites with his Take Shelter director; proving them to be a powerful, storytelling pair. Kirsten Dunst, Adam Driver, Joel Edgerton and Sam Shepard round out the cast.

Writer/director Richard Linklater describes his 1980-set, comedy Everybody Wants Some!! as a “spiritual sequel” to his 1993 breakout film Dazed and Confused. Set around a group of friends stumbling into adulthood on a collage campus, Will Brittain, Zoey Deutch, Ryan Guzman, Tyler Hoechlin, Blake Jenner, J. Quinton Johnson, Glen Powell and Wyatt Russell, some of them making their feature film debuts, round out the ensemble cast in the Paramount Pictures release.

After being booted by the Tribeca Film Festival, filmmakers Andrew Wakefield brings his documentary Vaxxed: From Cover-Up To Catastrophe straight to audiences at New York’s Angelika Film Center. Exploring a possible link between the MMR vaccine and the rise in cases of autism, Wakefield and co-writer Del Matthew Bigtree also argue that the Centers for Disease Control and Prevention (CDC) destroyed relevant data from a 2004 study. Look for the Cinema Libre Studio release to expand to nationwide art houses after its successful New York debut.

Fans of Sokurov’s 2002 film Russian Ark, set in St. Petersburg’s Hermitage Museum, understand that no other filmmakers can match his philosophical storytelling and thoughtful meditations on art, history and humanity. For moviegoers experiencing Sokurov for the first time, Francofonia, from Music Box Films, promises a movie experience without equal. 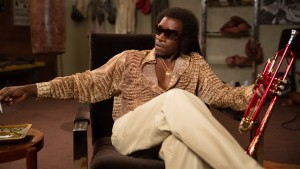 Miles Ahead
Don Cheadle directs and stars in the Miles Davis drama ‘Miles Ahead.’

Don Cheadle is a veteran actor known for numerous movies and the Showtime series House of Lies. Miles Ahead, with Cheadle starring as Jazz legend Miles Davis, marks his directorial debut.

In the movie, at the start of its platform release from Sony Pictures Classics, Davis waits for a check from his record company while holed up in his Manhattan apartment.