Do you remember the first time; your inaugural superhero movie in what quickly turned into a multiplex march of comic book blockbusters?

Was it Robert Downey Jr. transforming his showbiz career as Iron Man? Are you old enough to reminisce fondly about Michael Keaton playing Batman, not to mention Michelle Pfeiffer as Catwoman?

Well, for young moviegoers experiencing their first superhero movie, this is a lucky week. 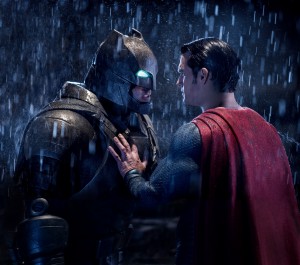 Excitement is at a fever pitch for Batman v Superman: Dawn of Justice, opening Thursday night for a robust round of early screenings prior to its debut weekend.

Advance reviews and all-important box office tracking is up, up and away positive for the DC Universe blockbuster and pivotal set up for Justice League, set to open Nov. 17, 2017 from Warner Bros.

Thank Batman v Superman director Zack Snyder for stoking the hype with a news-making interview that iconic Batman villains The Joker and The Riddler almost ended up in the movie.

“The Joker and the Riddler both came close to being in this movie,” Snyder told the genre site Collider. “We talked about the possibility of putting them in. Chris Terrio and I talked abut it a lot and felt that their mythological presence is felt in the movie and that’s cool, but I didn’t want to get my eye too far off the ball because I needed to spend the time, frankly, with Batman and Superman to understand the conflict.”

Making sure the DC Universe doesn’t receive all the attention this week, Directors Joe and Anthony Russo are busy promoting the third superhero blockbuster of 2016, Captain America: Civil War.

After listening to Downey Jr. describe the explosive battles between Captain America (Chris Evans) and his supporters including the troubled Bucky (Sebastian Stan) in all-out battle with Iron Man and his team as “The Godfather of superhero movies,” Joe Russo offers anxious fans a different take on the Marvel Studios release.

“What’s fascinating about the Cap-Bucky story as well is it’s a love story,” Joe Russo told Empire.       “These are two guys who grew up together, and so they have they same emotional connection as brothers would, and even more so because Bucky was all Steve had growing up.”

Oh, you noticed my description of Captain America: Civil War as the third superhero blockbuster of 2016?

Let’s be clear that nobody is forgetting about Deadpool, although it feels like the superhero big boys are coming to town and Ryan Reynold’s Wade will quickly fade from memory.