Chatter around the backlots continues to focus on Ryan Reynold’s surprise blockbuster Deadpool, which looks to lead box office with a sophomore weekend take of $50 million. It’s the film with the most buzz thanks to its hard “R” rating and willingness to poke fun at comic book storytelling.

Tragedy strikes a secluded family living in the frontier lands of 1630s New England. Is there a witch in the woods tormenting these pious settlers? The truth may rest with the family’s pretty daughter Thomasin (Anya Taylor-Joy). 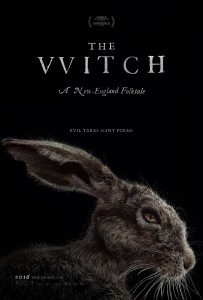 The Witch, from A24, delivers horrific beauty, breakout performances and more intelligent storytelling than a handful of found footage thrillers. Eggers and his creative crew build suspense masterfully. They also deliver a breathless, bonfire climax that will leave your head spinning.

Speaking of history, director Stephen Hopkins transports audiences back to the 1936 Olympics for an inspirational sports drama about track and field athlete Jesse Owens and his history-making feats at the 1936 Berlin Olympics. Focus Features releases Race with Stephan James as the iconic Olympian.

Director Matthew Miele follows up Scatter My Ashes at Bergdorf’s with another retail documentary, Crazy About Tiffany’s, the story of a jewelry store first opened in 1837 that transforms itself into an iconic brand with the signature blue box and white ribbon as well as breathtaking design. Crazy About Tiffany’s, from Gravitas Ventures, debuts at New York’s Film Society of Lincoln Center as well as digital streams.

Director and co-writer Naji Abu Nowar directs newcomer Jacir Eid Al-Hweitat in the drama of a young Bedouin boy accompanying his older brother on a mission to guide an English officer through the desert in 1916.

Check out Charlotte Rampling, not only in her latest film, 45 Years, but also in the eight-film retrospective simply titled Charlotte Rampling, playing Fridays and Sundays through March 6 at New York’s IFC Center. It’s a great opportunity to experience Rampling’s standout work on a big screen.