Pause from Grammys Red Carpet punditry for a moment — including chuckles over Taylor Swift’s pop popsicle-inspired, bare midriff dress from Versace Atelier and focus on the unforgettable performances from the 58th annual Grammy Awards. 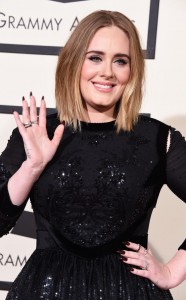 Recording Academy president Neil Portnow explains Adele’s Grammy Awards glitch with the piano microphone falling on the strings and generating clanking sounds during her performance of “All I Ask.” Brushing aside the tech snafus surrounding her first Grammy performance since 2012, Adele takes to Twitter and simply explains, “Shit happens.” Now, that’s grace under pressure.

It’s good to see musical performances celebrating the careers of the late Lemmy Kilmister and Glenn Frey. However, Natalie Cole’s family continues to express their outrage that the R&B singer did not receive an honorary performance equal to Bowie and King.

Unhappy with the video clip of Cole singing a virtual duet with her late father, Nat King Cole, Cole’s son Robert Adam Yancy tells Variety, “She deserves more than (to be part of a minute-and-a-half tribute…It was shameless the way they minimized her legacy.” 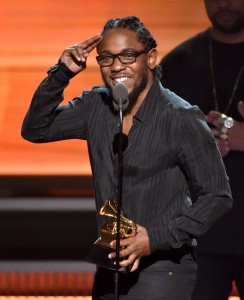 Big winners include Kendrick Lamar, winner of five awards including best rap album for To Pimp a Butterfly.

Taylor Swift wins for her album 1989. Justin Bieber earns his first Grammy win for best dance recording “Where Are U Now.” Four Grammy prizes go to The Alabama Shakes. Ed Sheeran wins song of the year with “Thinking Out Loud.”

More importantly, when it comes to online chatter and media impressions, the Grammys belong to Lamar.

Now, if only Pitbull and Robin Thicke could have closed out the show with a performance that didn’t feel redundant.

Let’s remember the funk and erotica of singer, model and actress Denise Matthews, better known as Vanity, a protégé of Prince who passed on Monday.

There’s also big news for the Jay Z-owned streaming service Tidal with Kanye West releasing his album The Life of Pablo as a limited exclusive on Tidal.