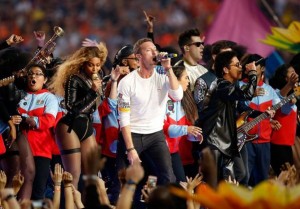 My head is still spinning from Beyoncé and her Black Panthers homage at Super Bowl 50. Really, would there even have been a half-time show if Queen B and Bruno Mars failed to grab the spotlight?

Yes; let’s share some sympathy for Chris Martin and his Arena Rock cohorts Coldplay. I think social media captures Martin’s performance perfectly when describing him as the “embarrassing friend who won’t leave the party.”

Thankfully, instead of Coldplay dullness, fans continue to focus on Beyoncé and her Rhythm Nation-like dancers flashing Black Power salutes and Black Panther-influenced berets as they perform her new single Formation with a clear shout out in support of #BlackLivesMatter.

In a quick shout out for branded content, I’m also a fan of Janelle Monáe and her Joy of Pepsi prelude to the half-time show.

New singles this week include I Feel The Weight by Miike Snow and Don’t Let Me Down by The Chainsmokers.

Finally, it’s never to early to start your festival mapping for 2016. Get started with the Coachella 2016 lineup. Oh, did we mention LCD Soundsystem will be taking the stage as festival headliner? Thought so.

← This Week on TV
This Week in Cinemas & Streams: Travel Back with Eli Roth for a New ‘Cabin Fever’ →