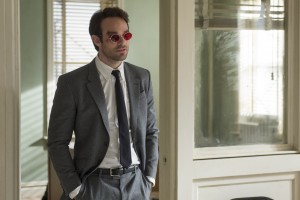 Check and double-check The Original Feed’s once-per-week column for the most-discussed cable shows, binge streaming and network specials. Even the most diehard couch potatoes have to prioritize. This Week on TV is your guide.

Netflix’s  Marvel’s Daredevil, starring Charlie Cox as blind Manhattan lawyer Matt Murdoch who moonlights as a costumed hero thanks to superhuman senses, premieres all 13 episodes 3am ET Friday April 10. Early reviews are strong; a good thing for Marvel Comics fans since Daredevil is the first of several Marvel Studios projects including series based on characters Iron Fist, Luke Cage and Jessica Jones and a mini-series based on the heroic ensemble The Defenders.

It will be a savage TV sprint to finish all 13 Daredevil episodes in time for HBO’s 9pm ET Sunday April 12 Season Five premiere of Game of Thrones, the fan favorite fantasy drama from showrunners David Benioff and D.B. Weiss and based on George R.R. Martin’s A Song of Ice and Fire series of books.

Premiering 10pm ET Thursday April 9 on FX, it’s impossible not to give a series matching the veteran Crystal with up-and-comer Gad a couple of weeks to find its funny. Besides, The Comedians airs directly before the 10:30pm ET premiere of Louie, the eight-episode fifth season of TV’s best comedy, featuring the hilarious Louis CK.

Lots of premieres this week; so it’s sad to wrap this column with a heartfelt goodbye to Kentucky lawman Raylan Givens (Timothy Olyphant) and his law-breaking nemesis Boyd Crowder (Walton Goggins).

Tuesday nights are going to feel lonely without Raylan Givens around to wisecrack.