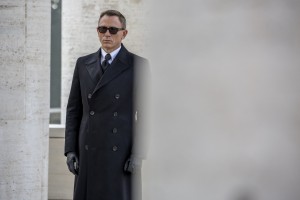 Go back and re-watch the productions shorts from SPECTRE’s Austrian locations and read the regular blog posts at 007.com. Just when anticipation begins to slacken for Bond fans, there’s a new blog post and behind-the-scenes image to reignite their excitement.

Yes, the Bond team knows how to build and sustain hype.

The hype moves up a notch this weekend with the first teaser trailer for SPECTRE.

The title SPECTRE says its all, Agent 007 coming face-to-face with the villainous organization best known from earlier Bond films and Ian Fleming books.

The teaser aims for artistry and subtle menace when compared to action-oriented spots for competing franchises like Mission: Impossible, Mad Max and Terminator. In many ways, the SPECTRE teaser strikes a similarly, somewhat subtle tone to the recent Star Wars: Episode VII – The Force Awakens teaser. 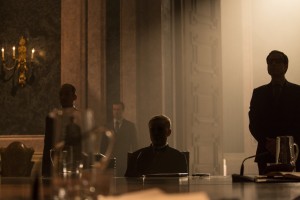 The Reveal: SPECTRE is more than just an enemy organization. This time, there’s a personal connection from Bond’s past that ties him to SPECTRE.

The Tease: We hear the playful voice of Christoph Waltz, identified in production materials as a character named Oberhauser, welcoming Bond to the SPECTRE’s inner sanctum. Yet, we don’t see him in the part believed to be Blofeld, the head of SPECTRE.

Here are Three Takeaways that make the SPECTRE Teaser worth watching multiple times.

No offense to the many filmmakers behind Marvel Studios releases but few action franchises can claim a director as arty as Sam Mendes. Pair Mendes with an extraordinary cinematographer like Hoyte Van Hoytema (Her, Interstellar, Tinker Tailor Soldier Spy) and the result is stunning images from Bond motoring across a still Austrian lake to the luxurious meeting room where Oberhauser welcomes Bond.

Credit the producers for smart choices and applaud Mendes’ clout for attracting top-notch talent to SPECTRE from up-and-comers like Léa Seydoux to acclaimed veterans like Monica Bellucci and Christoph Waltz.

James Bond remains the Tiffany standard of movie heroes and Daniel Craig continues to look the part after nine years. Craig is currently attached to Bond 25 along with Mendes. That’s good news for 007 fans.

The creative collaboration between Daniel Craig and Sam Mendes goes back to the 2002 period gangster drama Road to Perdition starring Tom Hanks and Paul Newman.