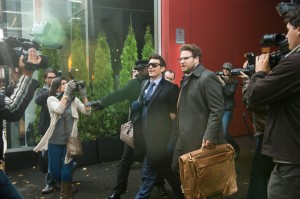 Yank the curtain on a Hollywood Dream Factory and the impact is disheartening. Movies and the creative people behind them are meant to entertain and sometimes, inspire us. Leave the mean-spirited bickering and dull accounting rules behind studio c-suite doors. There’s enough of that in our daily lives.

Shred the cinema curtain the way secret hacker organization Guardians of Peace recently vandalized and dumped Sony Pictures’ private correspondence, employee data, internal financials, unreleased films and in-production scripts onto global audiences and the results are game-changing both on and off-screen and off and online.

After some very public hand wringing and criticism from President Obama, Sony Pictures continues to stand behind the Christmas Day, omni-channel release of its “targeted” movie, the Seth Rogen/James Franco in North Korea comedy The Interview.

While theatrical box office for The Interview is modest at best, earning close to $5M from 581 cinemas after two weeks, its $15M take from more than 2M downloads is impressive.

Current hits like The Hobbit: The Battle of the Five Armies confirm Hollywood’s era of tent-pole blockbusters and superhero franchises, each one bigger than its predecessor. It’s amazing that a modestly budgeted comedy about a tabloid TV host (Franco) and his producer (Rogen) heading to Pyongyang to interview North Korean dictator Kim Jong-un only to be recruited by the CIA as temporary assassins has become the year’s top film story and biggest game changer.

Thanks to The Interview and its successful disruption of the studio release model, Hollywood will never be the same. Once the domain of indie titles and foreign-language releases, mainstream movies can reach sizable audiences on digital platforms from VOD to streaming channels.

Suddenly, there’s light at the end of industry forecasts showing a steady decline of young adults heading to cinemas for anything but ultimate, must-see blockbusters. Perhaps, The Interview, currently a bold act of showbiz disruption, will become the New Mainstream of cinema distribution. Imagine what ‘s in store for The Interview 2: Putin’s Poo. What will be the New Disruption?

Back on the topic of the Sony Hack heard round the world, cyber terrorists no longer can count on unfounded threats of violence towards studio executives or theater operators regarding whatever movie they consider offensive.

In the case of Guardians of Peace, which several published reports describe as hackers working for the North Korean (DPRK) Government with the aid of a Sony insider, it’s impossible to implement a successful cyber-attack when a studio reinvents what it means to release a celebrity-driven, Hollywood movie and refuses to back down even when company secrets are revealed.

Like all good stories, there’s ample ambiguity surrounding Sony and The Interview. With North Korean officials denouncing U.S. sanctions in retaliation for the cyber attack, it’s still to be seen who exactly spearheaded the breach of thousands of confidential Sony emails and business documents.

More importantly, entertainment pundits are eager to see the next studio movie to receive The Interview treatment.

Personally, I’m looking forward to the fast-approaching time where every studio movie outside the tent-pole category receives an omni-channel release and becomes the new mainstream.

Then, I’m ready for the Next Disruption and conversations about The Interview as the way things used to be.