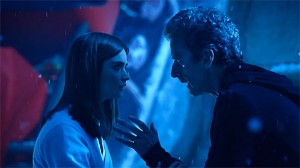 No paper crowns this year or Christmas Crackers to tug. Yet, the one British Holiday tradition that finds its way into my Midwest America home is my family watching the Doctor Who Christmas Special, Last Christmas.

It’s something I share with my teen son, Theo, a father/son routine going back to the debut Christmas special of the New Series, The Christmas Invasion, which introduced a boyish David Tennant as the Tenth Doctor in 2005.

In the most tense and complex Christmas special since the series reboot, the Doctor (Capaldi) and his pretty companion Clara (Jenna Coleman) are trapped at a North Pole research base alongside a team of scientists (Michael Troughton, Faye Marsay, Maureen Beattie and Natalie Gumede) battling alien monsters called Dream Crabs.

Santa Claus (Nick Frost) and two snarky elves (Nathan McMullen and Doctor Who regular Dan Starkey) join the battle as the face-hugging Dream Crabs attack by sending their Arctic base victims into a deep sleep in order to siphon their life energy while dreaming.

Director Paul Wilmshurst, director of Series Eight episodes Kill the Moon and Mummy on the Orient Express, mixes elements of sci-fi classics like Alien (face-grabbing monsters) and The Thing (an Arctic base under attack) to chilly effect.

Wilmshurst also carries over the Series Eight tension between Clara and the Doctor with Clara still grieving the loss of her boyfriend Danny Pink (Samuel Anderson) to the Cybermen and the evil Missy (Michelle Gomez). Nick Frost brings extra gusto to the story as Santa and more than matches the always entertaining Capaldi.

Doctor Who showrunner and screenwriter Steven Moffat pushes the storytelling to new heights of twistiness as the Doctor, Clara and the Arctic base staff debate whether they’re awake or trapped in a Dream Crab-induced fantasy.

Of course, the arrival of Saint Nick can only be a dream, or is he as fantastically real as the Doctor?

Near the end of the show, Moffat piles one twist too many atop the storyline and douses the episode’s creepy tension with dizzy confusion. A little bit of restraint would have been welcome.

Moffat also unleashes extra Christmas sentiment via a rollicking ride on Santa’s sled. It’s sugary sweet but right at home for a series that’s embraced by adult fans but rightfully focused on the children in its viewing audience.

After all, if you believe in the Doctor, it’s only right that you also believe in Santa.

One last thought on the fun and frightening Last Christmas.

Fans want to know if Jenna Coleman will return as Clara for additional adventures in Series Nine. Let’s just say the answer will surprise devoted fans convinced they know the answer after studying every Internet clue.