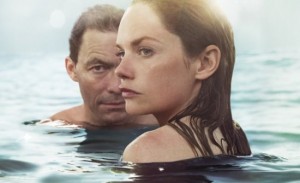 Dominic West and Ruth Wilson are the passionate leads of Showtime’s risk-taking drama ‘The Affair.’

Most cliffhangers unfold with gunfire and varying body counts. Mainstream network television keeps the bloodletting, well, understandably mainstream. Relive the death of Chicago power attorney Will Gardner (Josh Charles) on the CBS drama The Good Wife to experience a shocking murder free of any splatter.

Shift to cable networks from FX to AMC and the cliffhangers make a gory pivot towards explosions and drugs in AMC’s recently wrapped Breaking Bad, explosions and more drugs in FX’s recently finished Sons of Anarchy, and explosions, limb tearing and just about every gory act of violence you can imagine in AMC’s The Walking Dead.

Co-creators Hagai Levi and Sarah Treem (HBO’s In Treatment) take a different path with their Showtime series The Affair, which concludes its brilliant, debut season December 21.

Granted, The Affair is an adult relationship drama; worlds apart from its sibling and lead-in Showtime series, Homeland, with its action and espionage thrills.

Levi and Treem want Showtime audiences to settle down after an hour’s worth of noisy spy games with Homeland lead character Carrie Mathison (Claire Danes). They deliver edge-of-your-seat excitement via raised eyebrows instead of raised weapons.

Over nine episodes, The Affair unfolds its story of troubled relationships with the aid of multiple versions of the titular affair and enough dueling flashbacks to please fans of Rashomon.

Noah and Alison have different takes on their summertime romance down to the length of her waitress uniform. As their indiscretions multiple and reach Helen Solloway (Maura Tierney), Noah’s affluent and unsuspecting spouse, Levi and Treem do an impressive job building suspense and keeping audiences in a deep sense of wonder.

Maybe, I’m just speaking for myself when I confess that I don’t know exactly what’s going to happen to Noah, Alison, Helen or Alison’s husband Cole Lockhart (Joshua Jackson).

West, Wilson and Tierney are worthy of the praise and attention and there’s no doubt that The Affair is a performance-driven series. Yet, for me, what I love about the show and what makes it different from other cable dramas from Banshee to True Detective is its commitment to surprising audiences with affairs of the heart instead of some blood trail.

Sure, there’s a crime tucked behind the sweaty sex but it remains firmly in the backdrop. After all, The Affair isn’t True Detective despite a police detective driving the story through multiple interviews of Noah and Alison about the death of someone they both know.

Of course, Sunday’s season finale will have to deliver another cliffhanger, one hopefully true to the spirit of the season. After being renewed for a second season by Showtime in early November, Levi, Treem and the rest of their production team have to generate enough suspense to keep audiences on edge for Season Two.

That moment, those season-closing scenes, will turn out to be the most important cliffhanger of all and the closing image that determines just how risky The Affair wants to be.