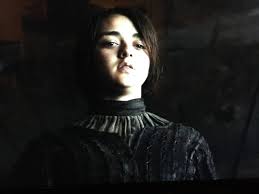 Good thing, at least from my sofa vantage, that S4 E1 ‘Two Swords’ unfolds steadily, smartly with an emphasis on character drama and suspense instead of blood spectacle. Series creators David Benioff and D.B. Weiss continue to promote S4 as stuffed with action, spectacle and a bloody casualty count. I have no doubt about that being the case before the new season’s ten-episode run comes to a finish by summer. Yet, until then, it feels good for author George R.R. Martin’s ensemble of Medievel-era characters, from luxurious King’s Landing to stark Castle Black in the northern hinterlands and the fortified slave city of Meereen across the sea, to re-start their stories with strength and subtlety.

In addition to writing the episode ‘Two Swords,’ Benioff and Weiss also step behind the camera for the first time. It’s safe to call this story, pulled from the pages of Martin’s third novel A Storm of Swords, a build up to explosive events to come as late Ned Stark’s massive sword named Ice is melted down into two smaller swords.

In King’s Landing, cruel King Joffrey (Jack Gleeson) prepares for his lavish wedding to scheming Margaery Tyrell (Natalie Dormer) but takes time to taunt his uncle, Jaime Lannister (Nikolaj Coster-Waldau), recently returned after a long imprisonment by Lannister enemies and still recovering from the dismemberment of his right hand.

Meanwhile, Daenerys Targaryen (Emilia Clarke) marches towards the slave city of Meereen with her three unruly dragons and an army of eight thousand “Unsullied” warriors.

The ‘Purple Wedding’ between Joffrey and Margaery takes place during next week’s episode. Until that momentous event, here are five moments from’ Two Swords’ that set the tone for S4.

1. Arya Stark (Maisie Williams), the young tomboy daughter of the late Ned Stark, tells her enemy captor Sandor “The Hound” Clegane (Rory McCann) that she wants a horse of her own to ride. What she really wants is vengeance aginast all who wronged her family. At the episode’s end, inside a ramshackle tavern, she clutches a Braavosi coin, quenches her growing thirst for vengeance and gains a horse of her own. It’s the best moment in ‘Two Swords.’

2. Jon Snow (Kit Harington) is guilty of breaking his oaths as a member of the Night’s Watch after infiltrating the camp of the enemy wildlings. But Snow, still smarting from the wounds delivered by his wildling girlfriend Ygritte (Rose Leslie), addresses the Castle Black council and not only wins his life but proves to be the new leader the Night’s Watch desperately needs.

3. Daenerys watches her dragons as they claw and fight over a goat carcass. One dragon also turns and snaps at her; a quick reminder that she may be the “Queen of Dragons” but she can’t control them.

4. The incestuous relationship between Jaime Lannister and his sister Cersei Baratheon (Lena Headey) fuels much of the series drama going all the way back to first episode of the HBO series. So it’s surprising to watch Cersei swat aside the advances of her brother and inform him that he took too long to break free from captivity and return to her.

5. The final take away from ‘Two Swords’ is subtle but important as dwarf Tyrion Lannister (Peter Dinklage) tries to soothe his child bride Sansa Stark (Sophie Turner) following news of the murders of her mother and brother. He also tries to do right by his secret lover Shae (Sibel Kekilli). But spies are watching Tyrion’s every move and reporting back to Cersei.

In Game of Thrones, it’s always wise to keep your enemies close. Still, as least with the ruling Lannisters, greater threats come from family.

← 300: Rise of an Empire claims thousands of male fighters but Eva Green is ruthlessly superior to all of them
Onsite Tears for Beyoncé at VMAs while Online Gossip Builds →