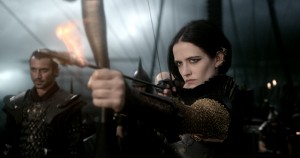 Eva Green stars as Artemisia in the Warner Bros. and Legendary Pictures adventure ‘300: Rise of an Empire.’

Step one in the Eva Green handbook for standout action performances is something sly and flirty. As Artemisia, the commander of the Persian Navy and the lead villain in 300: Rise of an Empire, a parallel Greeks vs. Persians adventure to the 2007 blockbuster 300, Green flutters her eyelashes, thick with black mascara, when addressing an Athenian prisoner.

The cinematic war between the invading Persians and the Greeks continue with Persian god king Xerxes (Rodrigo Santoro) leading the fight against Sparta’s King Leonidas (Gerard Butler) and 300 warriors at Themopylae. Meanwhile, seven years after director Zack Snyder’s movie adventure, director Noam Murro shifts the VFX-heavy spotlight to the Aegean Sea and the naval battle between Artemsia and her massive black Persian ships and barges to Greek general Themistokles (Sullivan Stapleton) and his smaller fleet of wooden Greek triremes.

Step two for Green, establishing Artemisia as ruthlessly superior to the thousands of male soldiers surrounding her, is to complement her Greek captive for his bravery. She also scolds him for his stupidity (he called her a whore) and then removes his head with a strong slice of her sword.

Step three is the clincher and arguably the best moment in all of 300: Rise of an Empire. Artemisia holds the head high for her Persian crew to see. While blood drips from its severed stump, the Persian commander plants a firm kiss on its mouth before tossing the head into the sea.

Now, that’s something only a female warrior can do.

Zack Snyder and 300 scribe Kurt Johnstad reteam to adapt Frank Miller’s graphic novel Xerxes, and the result is another movie adventure from Ancient Greek history brought to life with CGI bloodletting that rolls off the cinema screen.

The Greek heroes may change, this time with Sullivan Stapleton (Cinemax’s Strike Back) leading the charge as Themistokles with Hans Matheson as Themistokles’ advisor Aeskylos and Callan Mulvey and Jack O’Connell as father and son solders Scyllias and Calisto. Yet, their muscular biceps, firm thighs and rippling six-packs all look the same.

Green rises above this macho monotony with a tantalizing mix of bloodlust and simple lust snugly clad in a gold and purple metallic dress accessorized with chain mail.

There’s an acrobatic sex scene with Sullivan’s Themistokles every bit as sweaty as her romp with Johnny Depp in Dark Shadows. Better yet, the movie climaxes with a bloody sword fight between Artemisia and Themistokles on her Persian barge.

The history books tell us the fate of Artemisia but it’s fun just the same watching Green bring the character and the movie to life.

It’s been some 11 years since first watching Green in Bernardo Bertolucci’s The Dreamers, set during the ’68 Paris student riots, and I admit it’s still surprising to watch the 33-year-old Parisian in blockbusters like 300: Rise of an Empire, Dark Shadows and Casino Royale instead of a strict diet of intimate art-house fare like Womb, Perfect Sense and Cracks.

At first glance, Hollywood blockbusters aren’t good enough for an actress as complex and distinct as Green. She deserves something meatier. Yet, after watching 300: Rise of an Empire, it’s clear that blockbusters are made better by Green’s powerful presence. In a sea of macho male fighters, each one more muscular than the next, it’s Green who proves to be the bloodiest fighter of them all.