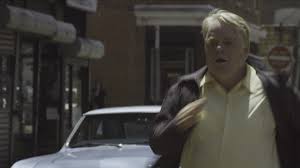 The Acura Lounge tent, erected specifically for the 2014 Sundance Film Festival, was enormous occupying a sizable footprint on Main Street in Park City, UT. There was enough room for public space and work areas as well as a separate pressroom separated by a thick wall of canvas and plastic doorway guarded by a very conscientious patrolwoman. The interview area was quiet early Sunday morning despite the opening weekend throngs of people filling the sidewalks. It was as if festivalgoers never went to sleep after the previous night’s parties.

Before his cast joined him for additional interviews and publicity photos, Slattery settled into a large leather couch and spoke privately about his hard-fought efforts to make his debut movie and what it meant for the next chapter in his creative career.

Slattery raised another point; one shared by God’s Pocket producer Theodora Dunlap sitting just across the room as well as co-producer Sam Bisbee later in the festival. God’s Pocket sparked to life the moment Philip Seymour Hoffman’s schedule opened and he signed on to play Mickey Scarpato, the hard knock lead character. Basically, without Hoffman, there would be no movie. 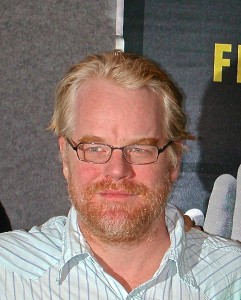 In the world of art-house cinema, at a place like Sundance, Hoffman was a giant, someone who singlehandedly could breathe a project to life and help it land a distribution deal.

His was a career filled with amazing highlights. In Charlie Kaufman’s film oddity Synecdoche, New York, a quirky stage play tucked inside a quirky movie, Hoffman was pitch perfect as Caden Cotard, a struggling New York playwright caught up in an out-of-control play based on his own life.

Hoffman was smart, sweet and emotionally rich in the working class love story Jack Goes Boating; a movie adaptation of the stage play of the same name, working both sides of the camera as the film’s director and lead actor. He was grounded and easygoing as Father Brendan Flynn, a kind priest going nose-to-nose with Meryl Streep’s rigid Catholic nun in the period drama Doubt.

Yet, the smaller, more independent movies always captured Hoffman’s spirit best. After a Sundance weekend spent celebrating two new movies, God’s Pocket, and director Anton Corbijn’s war-on-terror thriller A Most Wanted Man, it felt untimely and tragic to bid farewell to Hoffman so soon after celebrating his craft and beginning the year with so much creative energy including his planned Showtime series Happyish and a second movie as director, Ezekiel Moss with Amy Adams.

There were times in Park City that felt as if Hoffman was everywhere, supplanting Sundance Institute founder Robert Redford as the festival’s “official” face.

Hoffman joined his God’s Pocket cast members and crew for red carpet photos and an onstage Q&A before an enthusiastic premiere audience at the massive Eccles Theatre. He circled back to the same venue two days later for more of the same, this time joining actors Rachel McAdams and Willem Dafoe in support of A Most Wanted Man.

Scattered among the screenings were visits to photo lounges, on-camera interviews and brief visits to parties celebrating his Sundance movies.

It felt right seeing Hoffman pop up everywhere that weekend because there have been so many Sundance encounters before in support of past films like Paul Thomas Anderson’s debut movie Hard Eight (1996); the little-seen film noir Montana with Kyra Sedgwick (1998); the romantic comedy Next Stop Wonderland with Hope Davis (1998), the romance Love Liza (2002); the true crime drama Owning Mahowny (2003), the Amy Sedaris comedy Strangers with Candy (2005); The Savages with Laura Linney (2007); the Claymation drama Mary and Max (2009) and Hoffman’s directing debut Jack Goes Boating (2010). 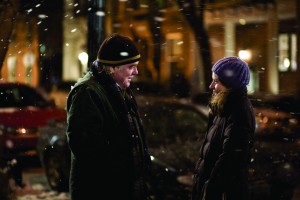 Basically, Hoffman and Sundance steadily became partners with each new independent project with the press alongside to listen to his latest career updates.

Over the years, I took part in frequent interviews with Hoffman at Sundance, other film festivals and assorted press days. Many of them felt overly familiar, a luxury hotel room blending into another luxury hotel room, although Hoffman was always insightful and gracious about his work and his ideas about art.

“People are always like I’m a theater person and you’re a movie person and I’m like, no, it’s all art,” Hoffman said during one of our many interviews. “It’s all feeding each other and influencing each other. I want to be nurturing that.”

Some conversations stood out due to the uniqueness of the situation like a quick chat in the backseat of a parked car after a Sundance screening of Love Liza.

My favorite Hoffman interview, one that exemplified his embrace of his upstate New York roots and hard-working ethics as an actor who’s focused on more than the paycheck, occurred in his first interviews on behalf of his titular role in Capote, a 2005 film that would lead to his Best Performance by an Actor Oscar as well as catapult his career.

On the upper floors of Toronto’s then Sutton Place hotel, a small group of journalists sat and waited for a round table interview with Hoffman to ask him about playing iconic author Truman Capote and bringing to life Capote’s famous book In Cold Blood.

During an extended wait, the film’s publicist came and reminded all of us to introduce ourselves to Hoffman before asking questions.

“Why would we waste our time introducing ourselves?” a friend and colleague from Milwaukee growled to the young female rep. “It’s not like he’s going to remember any of us anyway.”

Hoffman stepped into the room just in time to hear the complaint and he appeared visibly upset by the remark.

“Well, he’ll remember you now,” I joked out loud, and after a laugh, the interview commenced and Hoffman settled down and talked about the movie.

Funny, after a long list of movies and equally long list of interviews, that moment when Hoffman confronted a reporter who labeled him as too important to remember his name was what I remembered most clearly when I returned from seeing Hoffman at Sundance only to learn of his tragic death.

That funny incident continued to capture for me what distinguished Hoffman’s art from many other performers. He remained grounded, believable, a credible everyman who also happened to be a celebrity who could stop traffic at Sundance.

Now, during a closing life chapter involving grieving family and friends, arrangements for a private wake, confirmed autopsy reports, inheritance details and public funeral service as well as four arrests of people connected to the drugs found in Hoffman’s West Village apartment, remembering Hoffman as a relatable, grounded guy with problems like many of us but talent like no one else offered a brief sliver of solace to a tragic farewell.

← Creative Ownership ‘The Original Feed’
300: Rise of an Empire claims thousands of male fighters but Eva Green is ruthlessly superior to all of them →