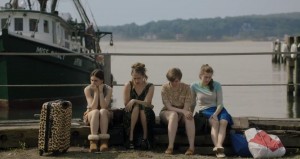 The chatter around Girls star Lena Dunham; at least in my circles, has nothing to do with her February Vogue photo spread and whether Annie Leibovitz and her creative team used too much photoshopping to make the 27-year-old writer/actress/producer look thinner. After all, every magazine model, celebrity or otherwise, expects some digital touch ups. It’s one of the perks for landing a photo spread in the first place.

My recent conversations-turned-arguments are more important than Dunham’s svelte vogue in an Alexander McQueen feather dress. It speaks to the core of her creative being. Basically, why is Season Three (S3) of Dunham’s incredible HBO series Girls anything but incredible? Why is the latest season of Girls consistently inconsistent and frequently unfunny?

The members of the Dunham Army, those faithful fans who go back to her 2010 art-house film Tiny Furniture and know that she co-wrote the indie drama Nobody Walks with filmmaker (and fellow Oberlin College alum) Ry Russo-Young, are quick to blame executive producer and co-writer Judd Apatow. More importantly, they focus on the gender breakdown of the current writing team that claims more boys than girls.

It doesn’t matter to the Dunham faithful surrounding me that Apatow helped launch the HBO series or that he co-wrote one of the best S3 episodes so far, Dead Inside, with Hannah dealing with the unexpected death of her book editor rather selfishly. To the faithful, the problem with S3 is akin to a showbiz conspiracy or a HBO power play falling across misogynistic lines.  My counter argument that veteran writer Paul Simms (NewsRadio, The Flight of the Conchords) wrote S3’s standout episode, Free Snacks, about Hannah landing a high-paying job as a brand journalist at GQ, also lands with a thud of disbelief.

After all, Dunham and showrunner Jenni Konner are responsible for the lion’s share of series high acclaim and higher cultural impact since its 2012 debut. These two talented storytellers couldn’t lose their grip on writer Hannah Horvath and her Brooklyn pals this quickly. Hannah’s shelf life is certainly longer than three seasons.

Well, officially it is since HBO renewed Girls for a fourth season just days before the S3 premiere. The setting for a creative comeback is falling into place and there’s no debate over who’ll get the credit if/when Girls reconnects with its comic groove. I’m ready to praise Dunham for reigniting her series. After all, I’m blaming her for the current problems.