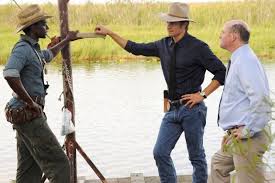 Fans of the FX crime series Justified, who may have forgotten that U.S. Marshall Raylan Givens (Timothy Olyphant) was originally transferred from Miami to his boyhood home of Eastern Kentucky, received a dramatic reminder last night courtesy of the Series Five premiere episode A Murder of Crowes.

Series Five began in tense fashion by pulling tight the dangling subplots of last season. Villain Boyd Crowder (Walton Goggins) took up large-scale heroin dealing in order to raise the cash needed to get his fiancée Ava (Joelle Carter) out of prison. Meanwhile, Givens continued to deal with a court settlement that awarded Dewey Crowe (Herriman)  $300,000 and the fact that his ex-wife Winona (Natalie Zea) and newborn baby are out of his life and residing in Miami.

In the episode’s best subplot, Boyd Crowder traveled to Detroit with criminal partner Wynn Duffy (Jere Burns) in order to resolve an attempted double cross over a recent heroin shipment. Far away from Kentucky, in the upper floors of a vacant public housing tower, Boyd appeared to be out of his depths and the results were thrilling.

Timothy Olyphant continued to deliver the best work in his career with a character tailored to his charms and personality. David Koechner (Anchorman 2) provided some welcome laughs as a Miami-based Marshall helping Givens. Edi Gathegi (X-Men: First Class) helped boost the tension as an advisor to Darryl Crowe Jr. who passes his time in the Florida Everglades hooking gators.

The bigger excitement over the Series Five premiere revolved around Michael Rapaport’s sly, sinister performance as Darryl Crowe Jr. (an original character not found in the Elmore Leonard books), a good old boy crook that looks to be every bit as colorful as Margo Martindale’s classic “Ma Barker” villain Mags.

Fans of Justified learned a long time ago that a great TV hero like Givens only thrives when facing great adversaries. On that thought, Series 5 debuted on the best note possible and hinted that Rapaport may be the villain the series needs to stay vital and fresh.

← DOCTOR WHO Celebrates Show’s 50th Anniversary With Thrilling ‘The Day of the Doctor’
‘Girls’ Troubles: Is Lena Dunham to Blame for Dull Season Three? →