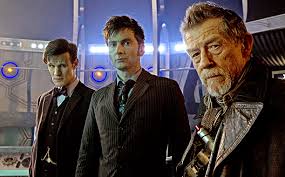 Matt Smith (left), David Tennant and John Hurt headline the 50th Anniversary ‘Doctor Who’ special ‘The Day of the Doctor.’

BBC and its stateside network BBC America are in a party mood this weekend thanks to marathon programming, a massive London convention and a pair of special specials celebrating the 50th anniversary of its iconic sci-fi series Doctor Who. It’s hard to believe that the eleven incarnations of the heroic alien named the Doctor, a traveler through time and space in a blue police box called the Tardis (Time and Relevant Dimension in Space) goes as far back as November 23, 1963.

Even if you’re not a fan of Doctor Who, you have to admit it’s an impressive achievement involving creative reinventions, continuous innovations and financial sustainability (still considering its production hiatus between 1989 and 2005.

My anniversary with Doctor Who goes back to the midway point of the series run, 1985, where I first encountered the show on late Sunday nights on the local PBS station with dorm mates at Loyola University in Chicago.

Jump forward in my time and space, exchanging a Chicago apartment for a Cincinnati home and dorm mates for a wife and son. Yet, to the amusement of many non-fans, my Doctor Who habits remain strong; shifting through VHS copies, DVDs and a ritual of watching the New Series since 2005 with my then, young son.

Anniversary shows are a difficult thing to pull off well especially with a TV show that’s been around as long as Doctor Who. After months of hype, plenty of storytelling hints, online mini films (including the incredible preview short The Night of the Doctor) and the wonderful origins movie An Adventure in Space and Time from writer/director Mark Gatiss and featuring David Bradley as the First Doctor (more on that fantastic movie later), the highly anticipated special The Day of the Doctor arrives featuring Matt Smith in his third season as the Eleventh Doctor and the return of the popular Tenth Doctor, David Tennant, as well as veteran actor John Hurt as a recently revealed character called the “War Doctor.”

Directed by Nick Hurran, who helmed an episode of Sherlock as well as the standout Doctor Who episode Asylum of the Daleks, and scripted by Doctor Who producer Steven Moffat, The Day of the Doctor is a lively adventure balancing a celebration of the Doctor’s colorful history with a fun adventure looking towards the future.

It’s 2013 London and the Eleventh Doctor (Smith) and his button cute companion Clara (Jenna Coleman) are called to London’s National Gallery by the secret government agency called U.N.I.T. to investigate a series of special canvases where “something” has busted free from inside the paintings.

Meanwhile, back in 1562 England, the Tenth Doctor (Tennant) finds his relaxing picnic with Queen Elizabeth I (Joanna Page) interrupted by alien invaders, the unexpected arrival of his eleventh incarnation and the “War Doctor” (Hurt).

There’s a reason that a rip in time has brought these three doctors together. It’s the day when the “War Doctor” ends the brutal “Time War” between his people on the planet Gallifrey and the villainous Daleks by destroying both civilizations. It’s a brutal act of warfare that will scar the Doctor forever. Unless, just unless, the “War Doctor” can be persuaded by his future selves to stop his act of utter destruction.

Matt Smith and David Tennant are two of the more popular actors to play the Doctor and their humor and zest complement each other perfectly. They generate plenty of laugh-out-loud moments and provide a playful spirit to a TV special that might have turned too serious in another writer’s hands.

Joanna Page, as Elizabeth I, and Jemma Redgrave as U.N.I.T. leader Kate Stewart bring extra sass to the story and Jenna Coleman is smart and steady as current Doctor companion Clara.

Billie Piper, so beloved as Rose Tyler, the first companion from the re-launched New Series, returns but in a very surprising way. There are other familiar faces (and one from the show’s future) that appear in a satisfying climax that brings the film to an exciting finish.

Still, the biggest praise belongs to John Hurt, both funny and sad as the “secret” Doctor convinced that the only way to bring peace to the universe is to destroy entire worlds. Is it too early to clamor for Hurt to make a return in another Doctor Who episode?

The 50th Anniversary special ends on a satisfying cliffhanger involving the Eleventh Doctor heading to a graveyard planet named Trenzalore. Actually, the shows really wraps with a sweet coda with the Doctor talking to an elderly curator who’s beloved by longtime fans of the show but an unknown face to younger fans like my son.

That’s the perfect harmony at the heart of The Day of the Doctor, some sweet nostalgia for longtime fans and excitement for adventures to come for all the young fans.

Always looking towards the future, even on the occasion of a show’s Fiftieth Anniversary, that’s the magic of Doctor Who.