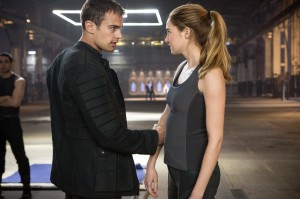 There are creative threads running throughout YA fantasy literature from Cassandra Clare’s The Mortal Instruments franchise to C.C. Hunter’s Shadow Falls series all the way to Suzanne Collins and The Hunger Games series.

Joining the mix are Veronica Roth and her Divergent books, about a 16-year-old girl named Beatrice “Tris” Prior who lives in future Chicago, a society divided into five factions determined by classic virtues and where teens must choose their place in life. Of course, Tris has a dangerous secret that threatens to upend the factions and choosing rituals as well as all of society.

Critics compare Divergent to the Hunger Games books and the similarities are evident throughout the first trailer for the upcoming movie adaptation by director Neil Burger (The Lucky Ones).

Click on the trailer link above and see if you agree on these four sstandout scenes that make Divergent a movie worthy of fan anticipation and provide some clear Hunger Games or Us choices.

Tris vs. Katniss or Katniss vs. Tris

Shailene Woodley follows up her career-making role in The Descendants with a chance to headline a fantasy franchise. She looks up to the task in the trailer, especially in a scene-stealing jump off a building ledge and worthy of replacing Jennifer Lawrence once the Hunger Games movies are finished.

Woody Harrelson provides plenty of chuckles as Haymitch Abernathy in the Hunger Games movies but nothing compares to the sleek coolness and teen good looks of having Divergent‘s Theo James on your side as your trainer.

Donald Sutherland is fantastic as President Snow in the Hunger Games franchise and Philip Seymour Hoffman is a great addition to the cast. Still, Kate Winslet joining Divergent as Jeanine Matthews, the leader of the Erudite faction who claims to be the smartest one in the room but who’s really the most dangerous, is standout casting.

The rural and impoverished district of Panem, Katniss’ home in the Hunger Games stories, is impactful but the future Chicago setting of Divergent looks to provide an awesome backdrop to the adventures awaiting Beatrice including a sprint to the top of the Navy Pier ferris wheel.

Divergent, from Summit Entertainment, is in cinemas March 21, 2014.

← One Sheet Wonder: Disney’s ‘Maleficent’
DOCTOR WHO Celebrates Show’s 50th Anniversary With Thrilling ‘The Day of the Doctor’ →