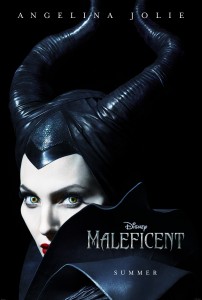 Angelina Jolie stars as the dark witch in Disney’s ‘Maleficent.’

Every 2014 release from Walt Disney Pictures looks interesting (Into the Woods, Guardians of the Galaxy) but Maleficent is the Disney movie generating the most excitement.

Written by Paul Dini, Linda Woolverton and John Lee Hancock and directed by Robert Stromberg, best known as the production designer for Avatar, Tim Burton’s Alice in Wonderland and Oz: The Great and Powerful, Maleficent looks to be more than just a live-action reboot of its animated fairy tale Sleeping Beauty featuring a young Princess Aurora (Elle Fanning) and the evil witch who curses the beautiful young woman into an endless sleep.

With Angelina Jolie stepping into Maleficent’s pitch black robes and trademark horned headdress, Stromberg reinvents the Brothers Grimm tale from the perspective of the female villain.

Maleficent is a marquee role for Jolie whose alabaster skin and high cheekbones looks stunning on the poster. She’s the one actress working today who can generate excitement for a movie simply with the debut of its one-sheet.

Get ready for Jolie’s throaty laugh as the dark and dangerous Maleficent via the film’s first trailer. The 38-year-old actress may be sparking a new Disney sub genre, fairy tales with the villain in the spotlight instead of some Disney princess.

Maleficent, from Walt Disney Pictures, is in theaters May 30, 2014. Juno Temple, Elle Fanning, Sharlto Copley and Imelda Staunton join Jolie in the movie.