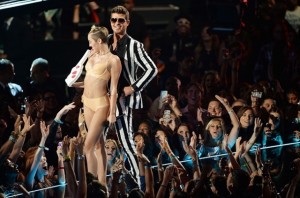 Miley Cyrus grabs the spotlight by grabbing Robin Thicke during her VMA performance.

It’s comical to think of a 32-year-old singer-songerwriter in line for a lifetime achievement award. However, the MTV VMAs (Video Music Awards) is appropriately youth-centric and just 30 years young itself. So Justin Timberlake, arguably the greatest hybrid artist in the MTV pop-o-verse, stands tall as the perfect choice as this year’s recipient of the Michael Jackson Video Vanguard Award.

“Half of the moonmen I’ve even won I won with these four guys right there,” Timberlake told awards presenter Jimmy Fallon and Brooklyn’s Barclays Center crowd.

Timberlake’s song-and-dance numbers, bouncing from one side of the Barclays Center to the other, wowed the majority of pop pundits who credited Timberlake for single-handedly saving the 2013 VMAs from awards show mediocrity.

Timberlake also went home with the night’s top prizes including video of the year and best male video for “Mirrors.”

Timberlake won the hearts of critics with a touching acceptance speech and a strong performance capitliazing on his comeback 2013 album The 20/20 Experience but the media spotlight belonged to Miley Cyrus for her sexy performance of her pop hit “We Can’t Stop.” Actually, the Twitter-verse exploded once Cyrus stripped to a nude bikini and gyrated alongside fellow pop star Robin Thicke while singing the first verse of his hit “Blurred Lines.”

Twitter reported 4.5M mentions for Cyrus compared with Timberlake’s 2.9M and Cyrus and Thicke’s performance led all VMA acts with 306,100 tweets per minute.

During the VMA’s red carpet preview, looking fab I must add on the streets of Brooklyn, Cyrus promised a performance to equal past VMA shocks like Britney Spears slithering onstage with a giant snake and Britney and Madonna locking lips with an on-camera smooch.

So Cyrus delivered as promised to MTV, her fans who clearly like her sexy makeover and arguably, to pundits like Brzezinski who take issue with a 20-year-old woman pushing the enevelope when it comes to eroticism.

Cyrus also accomplished another VMA feat beyond all expectations. She pulled the spotlight away from Lady Gaga, who opened the show with an arty performance of her new single “Applause.” Still, Cyrus benefited as Gaga’s great song continued to lose its sparkle throughout the night due to its overuse in the Kia commercial for a “transformed” Soul hybrid.

Cyrus also bested Katy Perry, who brought the VMAs to a shaky close with a lackluster performance in a boxing ring built under the Brooklyn Bridge for her newest single “Roar.”

Cyrus made Gaga and Perry look dull, not with her song and dance, but an outrageous striptease. She wanted to join Britney and Madonna with one of those VMA moments people won’t stop discussing and she clearly accomplished her goal.