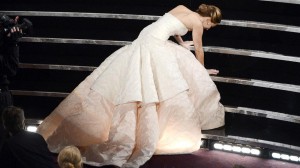 Jennifer Lawrence wakes up as Oscars Cover Girl thanks to her Awards Night Tumble.

All the Oscars predictions and odds making are over because, well, the 85th Academy Awards are finally history with first-time Oscars host Seth Macfarlane closing out the sprawling ceremony with a final song with Broadway star Kristin Chenoweth right after First Lady Michelle Obama made a video appearance and helped Jack Nicholson announce the Best Picture Oscar.

Speaking of the Best Picture Oscar, actor/director/co-producer Ben Affleck exits the Dolby Theatre as the night’s big winner with Argo, based on the true story of a 1980 CIA/Canadian operation to retrieve six American diplomats out of Iran, receiving the Best Picture Oscar as well as the Adapted Screenplay Oscar for Chris Terrio and the Film Editing Oscar for William Goldenberg.

It’s worth noting that many awards pundits predicted accurately with the only surprise being Christoph Waltz of Django Unchained beating The Silver Linings Playbook’s Robert De Niro for the Actor in a Supporting Role Oscar.

Still, in terms of capturing hearts as well as minds, Silver Linings star Jennifer Lawrence, winner of the Actress in a Leading Role Oscar, wakes up this morning as the Oscars Cover Girl — The New York Post calls her a “Fallen Star” — thanks to a brief tumble over the ballroom bustle of her Dior Haute Couture dress.

More so than her Oscar win (so predictable), Lawrence leaves the 85th Academy Awards with a boosted sense of grounded-ness and interaction with her growing fan community who now see her as just as clumsy as themselves.

As far as reviews go for Macfarlane, well, I actually think he’s too funny for the Academy Awards, its stale format and conservative core audience. Still, on the business side of the Oscars, the only the side that truly matters, an early ratings report from Yahoo shows ABC’s  85th Academy Awards telecast beating out the 2012 broadcast and delivering the highest numbers since 2007.

Expect Macfarlane’s solid ratings to reduce the sting from audience members still reeling from his opening number “We Saw Your Boobs.”