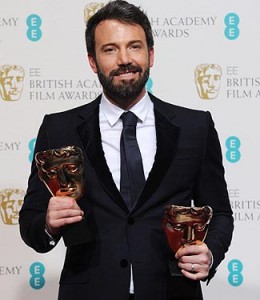 The Awards Season madness continues at full throttle with Oscar voting underway through Feb. 19 and the lush Academy Awards ceremony unfurling Feb. 24. Are you ready Seth MacFarlane? Like a Winter Storm Nemo-inspired blast of Awards Season news, only fluffier, the 2013 Grammys, the Baftas (British Academy of Film and Television Arts, or more simply, the British Oscars) and the USC Libraries 25th Annual Scripter Award, which recognizes the best adapted screenplay, all made for a weekend stuffed with awards ceremonies.

Finally, at the Staples Center in Los Angeles, home of the 55th Annual Grammy Awards, the British folk band Mumford & Sons won the album of the year gong for their second album, Babel.

“We figured we weren’t going to win anything because the Black Keys have been sweeping up all day and deservedly so,” lead singer Marcum Mumford said on-stage.

More interested in the Red Carpet Fashion courtesy of Taylor Swift and Rihanna than Grammy Winner Gotye? Well, CBS in addition to countless celebrity and fashion sites have you covered.