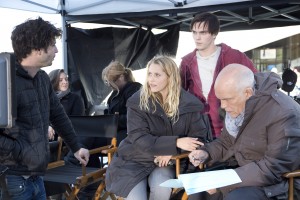 YA leads Nicholas Hoult (The Beast in X-Men: First Class) and Teresa Palmer (the feisty Number 6 in I Am Number Four) generate plenty of sparks despite their character differences but the Warm Bodies spotlight belongs to Levine, a mid-career filmmaker with a modest profile who deserves more acclaim than what usually comes his way. His movies are also worthy of added anticipation, well, at least I think so.

Levine is a filmmaker who re-invigorates genres with spunk and a playful lack of caution. After wowing 2006 Toronto International Film Festival audiences with his gory, sly horror film All the Boys Love Mandy Lane (introducing moviegoers to Amber Heard) and exciting Sundance crowds with his follow-up, the high-energy coming-of-age tale The Wackness, Levine makes Warm Bodies a fun-loving zombie movie that audiences will find impossible to resist.

Arguably, Levine’s prestige project is his somewhat solemn cancer drama 50/50 featuring Joseph Gordon-Levitt as the cancer survivor, Seth Rogen as his best bud and Anna Kendrick as the therapist who captures his heart. I like 50/50 a great deal and yet, in my mind, Levine is at his best when he’s tweaking less-serious genre tales and giving them an irreverent spin.

Maybe I’m biased because I continue to have strong memories of the Midnight Madness premiere for All the Boys Love Mandy Lane, the overnight acquisition competition for its film rights as well as the climactic battles over its final edit.

I also remember energized, Sundance chats with Levine and his cast at Village at the Lift brand houses after the premiere of The Wackness and the hubbub over Mary-Kate Olsen’s make-out scene with veteran actor Ben Kingsley. If you’re wondering, Mary-Kate gives Sir Ben a Big Thumbs-Up on the Kissing Chart.

So Levine is something of an expert at silly movies and one of those rare storytellers who can powerfully engage YA moviegoers. He’s no Awards Season favorite like Ben Affleck, who’s clearly engaged with more serious fare. He’s not a future Martin Scorsese. Levine is silly, whimsical and one of those rare adults who holds on to that childlike spirit of wonder that so many veteran creative lose over time.

After all, only a kid at heart could make Warm Bodies, something of a twisted fairy tale between a pretty girl and her zombie boyfriend with an army of killer skeletons trying to break them apart for good.

Movies like Warm Bodies will never make Jonathan Levine an Awards Season competitor to directors like Ben Affleck but it will make him a star to young audiences, which is a rare achievement.

Warm Bodies, from Summit Entertainment, is currently in theaters nationwide.

Screenwriter: Jonathan Levine, based on the novel by Isaac Marion

← One Sheet Wonder: Studio Ghibli’s ‘From Up On Poppy Hill’
The Morning Feed: Bafta Best Picture and Director Wins for Ben Affleck’s ‘Argo’ →