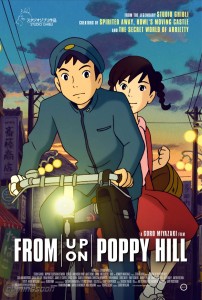 'From Up On Poppy Hill' One-Sheet. Opening March 15 in NY and LA.

Just as the late Japanese master Akira Kurosawa stepped away from his popular samurai movies for the Ed McBain-inspired crime thriller High and Low, it’s exciting to see Studio Ghibli make a creative shift from pure fantasy with From Up On Poppy Hill.