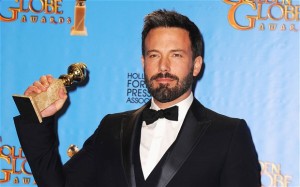 Free of last year’s controversial hosting duties by comic Ricky Gervais, the surprising Winner’s Circle of 2013 Golden Globe winners grab the morning-after spotlight and continue to add intrigue to awards season guesswork with the Final Voting for the Academy Awards on Feb. 19.

Ben Affleck makes headlines for Best Director and Best Drama wins for his Iran Hostage movie Argo; something of a shock since he failed to receive a Best Director Oscar nomination.

“I don’t care what the award is, when they put your name next to the names she just read off, it’s an incredible thing in your life,” Affleck said after accepting the award, as reported by the New York Daily News.

In Monday morning quarterback fashion, here are a couple of personal predictions regarding the awards season and the Golden Globes. Affleck’s wins are a huge surprise but I don’t think they will alter Lincoln’s big night at the Oscars.

In an evening filled with fashion commentary and jokey banter, Foster’s thoughtful acceptance speech remains the highlight of the night, whether you believe she revealed her sexual orientation or not. Personally, I don’t care either way. I’m just moved by the celebration of a unique, creative life that still has plenty of good work to come.

← The Morning Feed: Louvre-Lens, First Satellite Museum of the Louvre, Debuts in Northern France
One Sheet Wonder: Studio Ghibli’s ‘From Up On Poppy Hill’ →