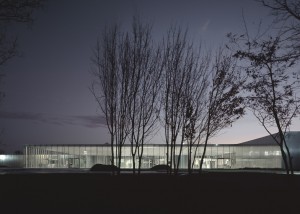 Excitement continued to build after today’s inauguration by French President François Hollande of Louvre-Lens, the first satellite of the world famous Paris art museum, scheduled to open to the general public Dec. 12. J.S. Marcus in The Wall Street Journal (WSJ) pointed out how the $194 million project first began a decade ago and how the once-vibrant mining town of Lens in Northern France won the rights for the satellite Louvre over six other French cities.

“People in this corner of France don’t go to museums, so we wanted to bring the museums to them,” Louvre-Lens director Xavier Dectot told WSJ.

Comprised of five buildings d4signed by the Japanese architecture firm Sanaa on the 50-acre site of a former coalmine and situated along a high-speed rail line, Louvre officials predicted 700K visitors the first year, including a large number of Parisians taking the one-hour train ride in order to experience the second Louvre museum.

Actor Jude Law, currently onscreen as Alexei Karenin in director Joe Wright’s Anna Karenina, took to the stage yesterday at Tate Britain in London and awarded the 2012 Turner Prize to Elizabeth Price for her video art including a 20-minute film called The Woolworths Choir of 1979.

Price, former singer in the ‘80s alt band Talulah Gosh, used the award to promote more accessible British education and public arts funding in an interview with The Guardian.

“…What you end up with is art becoming something that is available only to privileged people, and expressive only of that experience,” Price said in the interview. “That’s also what’s so damaging about the withdrawal of state funding for humanities and arts at universities: these will become the subjects of the privileged, and history-writing and novel-writing and art-making and poetry-writing will become homogeneous.”

1 comment for “The Morning Feed: Louvre-Lens, First Satellite Museum of the Louvre, Debuts in Northern France”