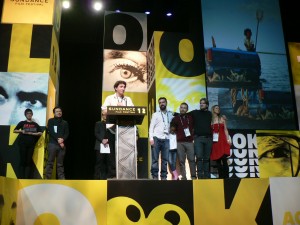 It’s morning after time for filmmakers both ecstatic and devastated as John Cooper, Director of the Sundance Film Festival (SFF), joined his Sundance team in announcing U.S. and World competition segments for Sundance 2013.

After directing two episodes of the comedy series Childrens Hospital, actress Lake Bell (No Strings Attached) joined Shelton in the U.S. Dramatic category with her debut feature In a World…, about a vocal coach who aspires to become a voiceover star like her father.

Directors Carl Deal and Tia Lessin, who were at the 2008 Sundance Film Festival with the their film Trouble the Water, about a rap artist surviving Hurricane Katrina, joined the 2013 U.S. Documentary Competition class with their doc Citizen Koch, about outside special interests trying to influence the politics of Wisconsin.

“The films, both documentary and narrative, selected for our 2013 Festival have a particular immediacy and fearlessness to them showing us that independent film is as vibrant, creative and relevant as ever,” Cooper said in a release. “Filmmakers are telling raw, powerful stories that are sure to create new energy in audiences and communities across the globe in the months to come.”

SFF programmers chose 12 films for the World Cinema Dramatic Competition including the Afghanistan drama Wajma (An Afghan Love Story) from writer/director Barmak Akram. Pussy Riot – A Punk Prayer, about the three young Russian artists imprisoned for a satirical performance in a Moscow cathedral, joined eleven other films in the World Cinema Documentary Competition.

It Felt Like Love, filmmaker Eliza Hittman’s tale of a teenage girl’s sexual obsession, joined nine other movies in the NEXT Competition, a section reserved for movies that pair digital technology with brave storytelling.

The 2013 Sundance Film Festival runs January 17 through 27 in Park City, Salt Lake City and Ogden and Sundance, Utah. The announcements for the opening day films are forthcoming as well as Spotlight, Park City at Midnight, New Frontier and Premieres sections. Check HERE for the full list of  competition films.