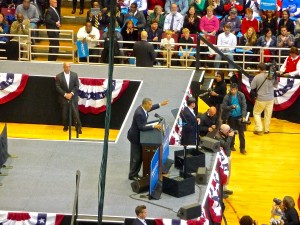 President Obama rallies crowd of supporters at University of Cincinnati.

The grand theatre of American presidential elections reached its emotional climax last night with NBC calling the swing state of Ohio (my home state) for President Barack Obama at 11:12 p.m. ET and announcing his victory over Republican challenger Mitt Romney. Other networks quickly followed although Romney waited until 12:55 a.m. ET to deliver his concession speech and offer congratulations to Obama for gaining a second term as America’s first African American president.

Romney received glowing reviews from NBC and other outlets for his gracious concession speech last night but Obama made landmark news on the social media landscape. Mashable reported that Obama’s “Four More Years” tweet with a photo of him hugging first lady Michelle Obama became the top retweet in the history of Twitter with 350,000 re-tweets as of last night and 100,000 “favorite” tags. For political pundits praising Obama’s data-savvy, innovation-heavy campaign, the President’s lightning-fast, Victory Night use of Twitter to connect with supporters brought home his skilled use of digital tools.

Fingers crossed that Blancanieves, which made its world premiere in September at the Toronto International Film Festival, finds its way to the final selection of Best Foreign Film Oscar nominees.

Apple’s iPhone continued to inspire innovative design accessories with The Guardian’s Oliver Wainwright reporting on the Spraytect, an iPhone pepper spray case by US entrepreneur Scott McPherson. Wainwright described the Spraytect vase as a matter-of-fact, wraparound case with a slot for a pepper spray canister and a safety catch. McPherson only offered a variety of colors for the debut Spraytect model, which means iPhone users hoping for a Hello Kitty edition will have to wait a little bit longer.